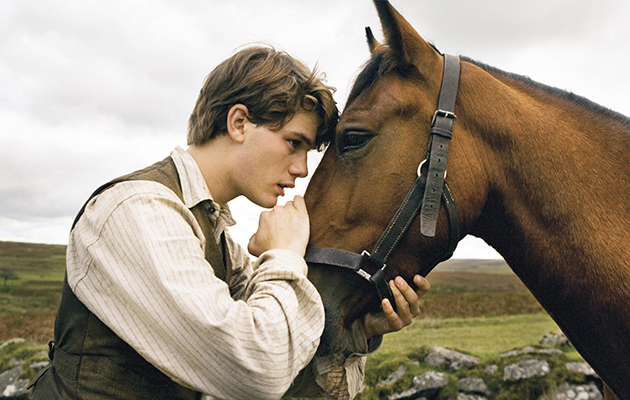 Ahh, Poldark. Everyone in the UK obsessed with the shirtless Aidan Turner, but all the horsey viewers can think is: “Does he gallop that horse everywhere? Poor thing must be knackered.” But in every film or TV programme set bygone eras, the horses are always cantered or galloped everywhere, as if whoever puts these shows together simply can’t conceive of a time when people had to get from A to B at less than 30 miles an hour. Here are a few more horsey film and TV bloopers…

The Last Samurai stars Tom Cruise as Captain Nathan Algren, an American soldier who comes to embrace the Samurai culture he’s been sent to destroy – but it’s his horse that’s the real star of the film. As Captain Nathan Algren arrives to muster his Samurai before battle, and leaps off his horse, it kicks an unsuspecting extra in the nuts. Ouch! Take a look at the clip above.

One of the best-loved films of all time, Ben Hur scooped a record 11 Academy Awards. Set in Ancient Rome, the 1959 classic stars Charlton Heston as the eponymous slave who becomes a charioteer. And meets Jesus. As you do. Anyway, it features an epic nine-minute chariot race – although eagle-eyed viewers have pointed out that you can see modern tyre tracks ahead of the chariots, from the lorry carrying the cameras. Not to mention the fact that animal-loving Ben Hur seems to be confused about which of his horses is which, mixing up his two mounts Rigel and Aldeberan during the course of the film. Oops.

The Spielberg film War Horse tells the story of a hunter, Joey, one of millions of British horses requisitioned by the cavalry during the First World War. During the cavalry charges in the film, swords are held at shoulder height as they would for charging enemy cavalry, not knee height for charging infantry. This was a deliberate decision in order to have the blades more visible. If they’d done it for real, they’d have been mown down by the enemy – and War Horse would be a much shorter film.

4. Hang on there, Johnny

In Johnny Depp’s 2013 version of The Lone Ranger, Depp, who plays Tonto, seems to be having some trouble controlling his trusty steed, Scout. Some of those dismounts look somewhat unscheduled (takes one to know one, right?). Apparently, one scene was cut from the film where Depp’s saddle slipped and he was dragged 25 metres by an over-excited Scout. Cool as ever, he remarked afterwards: “Can I tell you what the positive thing is? That my coccyx didn’t take it. Chicks dig a broken bone.”

If you’re a fan of natural horsemanship, you’ll probably already have checked out The Horse Whisperer, in which Robert Redford cures a traumatised horse in just one session by staring at it for a bit. Curiously, the same technique seems to work on the horse’s equally traumatised owner and her mum, who falls in love with Robert Redford. Unfortunately, she’s already married, and no amount of whispering can change that, so the story has an unhappy end — for the humans, anyway…

The BBC swashbuckling drama Musketeers features some lovely-looking beasts, and the horses aren’t bad either. But FOR THE LOVE OF GOD, TIE YOUR HORSES UP. In every scene, whether it’s in the Paris slums or a field in the middle of nowhere, the Musketeers just casually stride away from their valuable horses, fight a few baddies, shoot muskets all over the place – and the horses are always waiting patiently for them when they’re done. They don’t run off, nobody steals them. Hardly a hotbed of crime after all, revolutionary France. Who knew, eh?