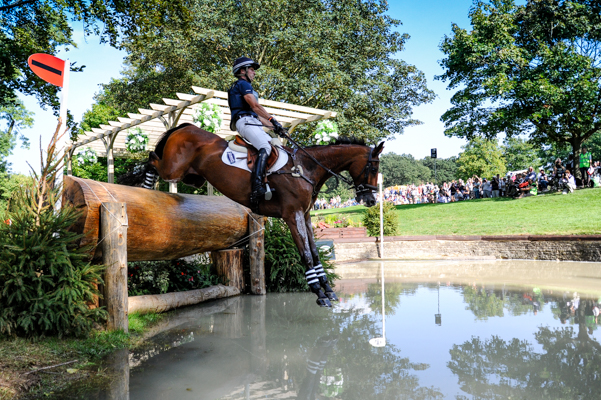 The leaderboard has undergone a complete reshuffle after the cross-country phase at the Land Rover Burghley Horse Trials (29 August-2 September).

The new leader is New Zealand’s Tim Price, who put in a slick round aboard Ringwood Sky Boy (pictured below) to stop the clock just one second over the optimum time of 11min11sec.

“I did what I could and that was good enough for me,” said Tim, who was stung by a wasp on the way to the last fence. “I’m elated for my horse — he’s like my best friend and it was fun out there. The conditions were great and I’m thrilled for Verenna Allen, who owns him with me, as she has been behind us the whole way.”

Tim’s score of 27.3 is just .6 of a penalty ahead of second-placed Oliver Townend on last year’s winner Ballaghmor Class (pictured below).

“My horse was unbelievable — I really didn’t know if he would get the trip at the speed I knew we had to go,” said Oliver, who is also 10th and 13th on MHS King Joules and Cooley SRS respectively. “He felt like a different horse altogether today compared to last year, where he was a bit naïve. But this year he kept digging deep for me and was clever.”

Piggy French is in third with Vanir Kamira, aboard whom she was second last year. They were just three seconds over the optimum time and sit on a score of 31.1.

“She’s a fab little mare and I think you could strap a monkey to her and she’d go round,” laughed Piggy, who now sits on a score of 31.1. “You do have to keep her balanced though as naturally she likes to run on her head, but she’s such a game little girl. I’m now kicking myself that I was three seconds over. She was off the bridle at the Trout Hatchery, but I filled her up with air at the top of the hill after the Cottesmore Leap and she flew home.”

Harry Meade is fourth with Away Cruising on 31.1, with Andrew Nicholson fifth on four-star first-timer Swallow Springs, who was just one of four combinations to finish inside the optimum time. The others were Ireland’s Elizabeth Power, who was 37th after the dressage and is now in seventh on Soladun and Tina Cook and Star Witness who have enjoyed a meteoric rise from 62nd to 12th — both of which horses are thoroughbreds.

Andrew Nicholson is eighth on his other ride, Jet Set IV, with Richard Jones ninth on Alfies Clover, who put in an immaculate round.

Dressage leader Mark Todd dropped completely out of contention when he suffered a fall with Kiltubrid Rhapsody at the seemingly innocuous Gurkha Kukri, a let-up fence a third of the way round the course. Horse and rider walked away.

The final horse inspection gets under way tomorrow morning before the final showjumping phase.