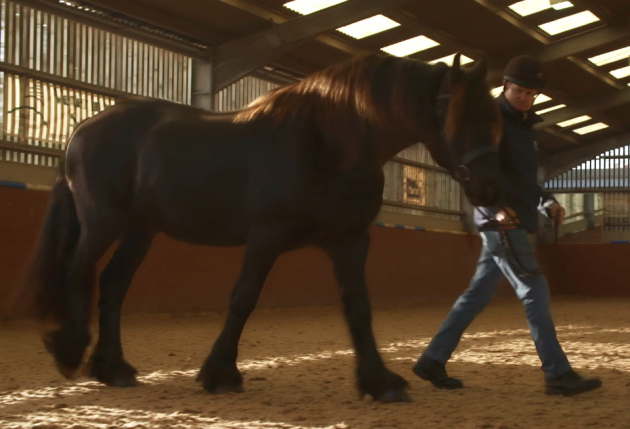 Karen Wright, yard supervisor at World Horse Welfare said: “When Spikey arrived he was in a very poor condition. He was emaciated, suffering from rain scald, had a swollen, infected sheath, had lice and a nasal discharge.”

The rehabilitation of Spikey began straight away, with the team’s first priorities to address his skin problems and ensure he was getting the right nutrition.

“We began intensive physio work as we initially hoped we might be able to ride Spikey in the future. Unfortunately, after consultation with the vet and physio it was decided that as he had been so weak for so long, he wouldn’t be suitable for a ridden career and instead would make a lovely non-ridden companion,” explained Karen.

Haygain has supported Spikey throughout his rehabilitation, which helped ensure the gelding had the best forage possible available to him.

Laura Marsh, marketing manager of Haygain, said: “We’ve followed Spikey’s progress at World Horse Welfare and it’s been lovely. Obviously Spikey was in poor condition so steaming hay made it more palatable for him, encouraging him to eat more. It also helps eliminate any respirable spores and bacteria, which means it was one less thing for his immune system to have to deal with.”

At the beginning of 2018, Spikey was ready to find a new home after the tireless work of the World Horse Welfare team to get him back to full health.

David Boyd, who has been a field officer for World Horse Welfare for 13 years, saw Spikey was looking for a home and fell in love straight away.

“I looked on the World Horse Welfare website and saw Spikey — he fitted the bill perfectly,” said David, who has a wealth of experience with horses as his previous job was as the officer commanding of the Army’s equine division for 19 years at the Defence Animal Centre in Melton Mowbray. “We sadly lost our own horse, aged 34, a couple of months ago. We gave ourselves some time to get used to the fact he had gone and then looked on the World Horse Welfare website and here we are today.

“We were looking for something around Spikey’s size and being, in the Household Cavalry for 28 years, all our horses were black, so we were immediately drawn to Spikey.

“World Horse Welfare’s rehoming process is very straightforward. The list of horses and ponies that are ready to be rehomed from all four farms is updated on the website every Wednesday. You can use the search parameters to narrow down what you would like, whether that might be a ridden horse or pony or non-ridden companion.

“Once you find a horse or pony that you think might be suitable, you fill out an application and submit it to World Horse Welfare, who will then get in touch. If the team believes you could be the right person, you are invited to ride the horse if it is a ridden one, or to come and handle the horse if it is a companion to make sure you are au fait with everything that is involved with owning a horse.

“The biggest joy for anybody taking on a World Horse Welfare horse or pony is that if your circumstances change in the future, the charity will take them back — the charity always owns the horse, thus ensuring the future is always positive for them.

“Spikey will be coming home to us in a few day’s time and he will have a life of luxury.”

The Haygain team are delighted that Spikey’s story has been such a positive outcome.

“We’re so pleased to hear that David will be rehoming Spikey. It’s great that Spikey has found such a knowledgeable home, and we would be delighted to provide David with his own Haygain steamer so that Spikey can remain on steamed hay and continue to be in the best condition possible,” said Laura.