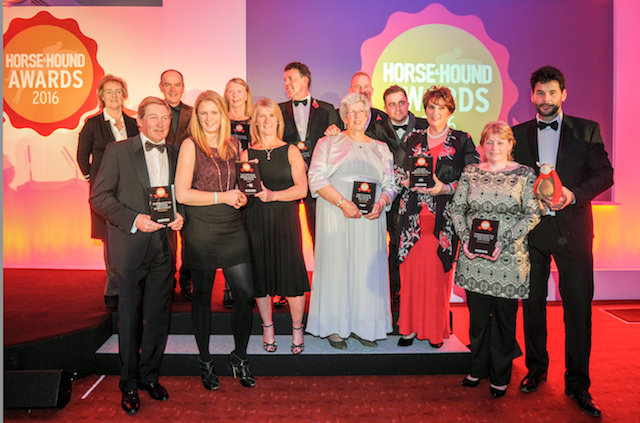 The Olympic showjumping champion thanked all those who voted for him, having watched a film of friends, family and colleagues describing just why he deserved the award (above).

Nick paid tribute to Big Star, saying: “He’s an amazing horse and without him, I wouldn’t be standing here.”

When asked about the challenges he had overcome to achieve his dream, Nick said: “Anyone – any sportsman – if you want something, you have to drive for it, and I think I’ve been lucky along the way.

“When I broke my neck, Arko gave me inspiration to start again, and then when I thought it was all over again, Big Star came along.

Nick’s was the last of 11 awards to be given out, at Ascot racecourse.

It was a successful evening for Charlotte Dujardin’s connections, as Charlotte was voted Spillers professional rider of the year, while Valegro was named Country & Stable horse of the year, and Alan Davies Horseware groom of the year.

Charlotte apologised for being unable to attend the awards, but said: “Thank you so much everyone for voting for me,

“It’s a huge honour for me to receive this award among so many top riders.”

Valegro’s co-owner Roly Luard said: “It was very stiff competition and I certainly wasn’t sure we’d take the title so we’re extremely grateful to H&H readers and we feel very privileged and honoured.

“I’ve enormous admiration for Valegro. He’s the most achieving horse I’ve ever known. The thing I love more than anything is he’s always on your side, always willing, never in a bad mood and just always wanting to please, which is extraordinary.”

“I was amazed to win,” said Alan, who paid tribute to the other shortlisted grooms.

“To be part of that and nominated is just mind-blowing. I’m so chuffed, I can’t believe it.

“I just hope I can represent the whole industry and receive this for all grooms. So we all get the recognition we deserve as it’s a tough job and I think it’s one of the most important ones in the team.

“I hope it’s inspiration for other people to come into the industry.

“I’m not used to being in the limelight; I’m used to being behind the scenes cheering for everyone. It’s a really strange feeling but one of immense pride and huge joy.”

The H&H inspiration award was collected on the late Hannah Francis’s behalf, by her parents James and Rachel.

James said: “Thank you so much everyone for getting behind what was a dream for Hannah.

“She wouldn’t have realised it would get so big but she wanted to do everything she could, and hopefully she’ll be remembered for that.”

Eventer Ben Hobday’s recovery from cancer to jump double clear at Badminton this year was voted Charles Owen moment of the year. “It’s unbelievable,” he said. “I felt a bit out of my depth with all these superstars.

“I want to thank the people who voted for me – they’re the people who messaged me and picked me up when I was down and in a tricky spot. It’s an award to reflect their kindness.

“It’s nice to be here but even nicer they were there to help us.”

‘All part of a team’

NAF Five Star ProFeet farrier of the year Paul Woodall said: “When you work with horses, you’re all part of a team, and I couldn’t do what I would like to without the support of everyone else involved.

“Although I’m here collecting this award, the others involved with the care and keeping of a horse should be taking as much credit.

“Thank you to everyone who voted for me, and particularly thank you to my wife Mary, for her support.”

TopSpec vet of the year Ken Anderson said he was “overwhelmed”.

“It was very humbling to win,” he said. “I was nominated by a client who had a near-fatal car accident and was told she’d never ride again; she offered me her horse to ride.

“This award should be in recognition of the whole team – I work with a great team of vets.”

Pikeur amateur rider of the year Claire Abel said she was “properly surprised” by her win.

“H&H kept quoting me as the best amateur dressage rider, but that’s only dressage,” she said.

“I now work for myself, which means I can manage my time – but I have to get up very early to ride first!”

Jane Cepok, who was voted Equo Events volunteer of the year, said she was “really, really chuffed”.

“This is fantastic but it’s not just for me. It’s for all the horse trials world and Riding for the Disabled world and the hundreds of other helpers.

Lucie Scopes is chairman of Crown, which was voted NAF riding club of the year. She said: “To win means everything. It really is the icing on the cake — it’s our members’ win — they all got behind us and we feel very proud and lucky to have them.”