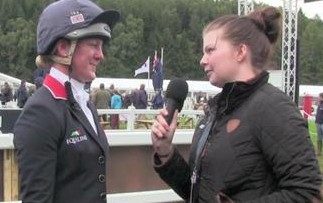 Find out how all the British riders fared today (Sunday, 13 September) at the Longines FEI European Eventing Championships at Blair Castle.

Nicola Wilson, 38, with Mary and Gerry Kemp and Janine Shewan’s One Two Many (team rider) — fence 7 down, 27th

Nicola crashed through fence seven, a brown oxer after a turning related distance from the treble, and had to hang on tight to avoid a fall.

“That distance is coming up quickly, which I knew, and I over-prepared for it and put him in an impossible position,” said Nicola.

“He was very good to jump it. Everything goes into slow motion when that happens and I was just thinking that we [the British team] are down to three riders and I had got to stay on. I had a lot of time to think about the consequences of falling off.

“This week hasn’t gone to plan for me individually, but my score is still important to count for the team and it’s such an honour to be part of it.”

“He was jumping amazingly until fence 7 and I was a bit on the inside line — I should have been a bit more to the outside,” said Holly.

“I’m relieved to have completed my first senior championship and now I’m looking forward to my next event.

“If you’d said that I’d have been showjumping in the top portion at a European Championship and have ridden round that cross-country track at the beginning of the year, I’d never have believed you.”

Sarah Bullimore, 42, with Brett Bullimore and her own Lilly Corinne (individual rider) — fence 7 and 9a down, 26th

“She’s normally a really good showjumper, she just got a bit buzzy in there and a bit onwards,” said Sarah. “I lost her a bit to fence 7 and got there a bit quicker than I would have liked, which happened to lots of horses. She landed a bit running to the next two fences before I got her a bit more under control again.

“It’s been an honour to be here. I’m a touch disappointed with our performance, but there are always ups and downs and what could have beens. It’s disappointing, but that’s horses. She’s a lovely horse for the future.”

“She felt good — it’s nice to jump a clear round on the last day,” said Oliver. “I’ve not had many easy trips in the showjumping with a few of my other horses but she’s a good jumper so there are no excuses.

“We’ll aim for Badminton next year.”

Pippa Funnell, 46, with her mother Jenny Nolan, Ruth McMullen and her own Sandman 7 (team rider) — clear round, eighth

Pippa Funnell and Sandman 7 at the European Eventing Championships at Blair Castle. Picture by Peter Nixon

“He just didn’t take off over the fence; I think he must have misread the question as he’s never had a stop in his life. Obviously it’s gutting but overall I’ve got to be pleased with how he composed himself to finish the rest of the course.

“It’s been an absolutely amazing experience to compete here, I’ve really enjoyed it and the horse has given me a fantastic ride all week. I’m over the moon with how he jumped and dealt with the pressure.”

“Today is really frustrating,” said Laura. “He was jumping really nicely, but he didn’t see fence 7 as a jump. He never focused on it. I don’t know if it was blending into the grandstand or he was focusing on the exit, but it unsettled him and then he hit the planks. Then he jumped well again.

“Overall our performance is exciting for the future, but frustrating now.”

“He’s been fantastic all week and he couldn’t have jumped better today,” said Kitty. “He flew round there and you can ride with such confidence when they’re jumping like that. He hasn’t had a pole down all year, so I knew he could do it if I didn’t mess up.”

“It’s a real shame,” said Izzy, who was in individual bronze position before the showjumping. “She tried really hard and I wouldn’t have done anything differently, it’s just part of the sport.

“I’m very competitive, so I will be disappointed when I look back and think I could have done this or that differently, but hopefully I’ll move on and be better in the future.”

Read about who won the medals today

Re-live the showjumping with H&H Live

Full report from the European Championships at Blair in H&H next week, out Thursday, 17 September — 19 pages of analysis and photographs, plus columns from Anna Ross, Harry Meade and Mike Etherington-Smith.