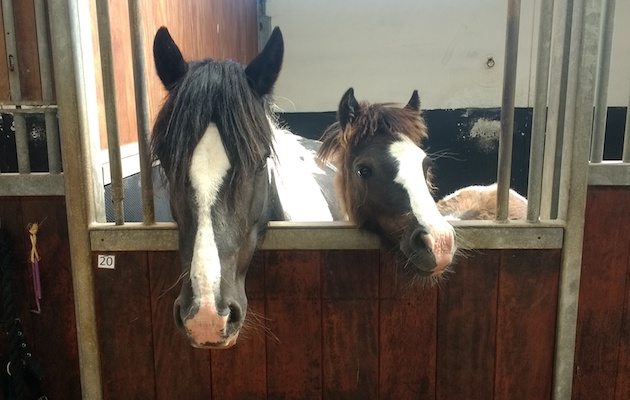 A leading welfare charity is urging owners to take action on ragwort after a mare was brought into its care with severe liver damage.

Dolly was found by a World Horse Welfare field officer in Dorset in March 2017 with a foal at foot.

The mare was weak and struggling to survive while caring for her foal, named Rocket by staff at the charity.

“When Dolly first arrived she was very thin, with all her ribs and vertebrae clearly visible,” said Glenda Spooner Farm supervisor Grace Vooght.

“When new horses come into our care they are always examined by our vet and routine blood tests are undertaken to ensure they are not suffering any underlying problems.

“When Dolly’s results came back it became apparent she was suffering from severe liver damage which could have been caused by a number of poisons.

“One of the most common causes of liver damage that we see is ragwort poisoning, but without knowing her background, it was difficult to determine what had caused Dolly to be in such a terrible condition.

“The first step was to wean Rocket on to eating more independently so he was less reliant on Dolly’s milk, which worked well as he was quite a greedy foal.

“This allowed Dolly to put what little energy she had into repairing her damaged liver.”

Ms Vooght added that Dolly’s condition did not seem to be improving, with blood tests showing little progress in her liver’s healing.

“We continued to monitor Dolly and provide her with all the nutrition she needed so she could bring up her young foal and it was very much touch and go as to whether she would survive,” she said.

“After a few months of dedicated care and attention, Dolly miraculously began to recover and her liver finally started to function properly, which amazed us all.

“Both ponies are now living out in their herds and have undertaken their handling training as well as learning to go into a trailer – all in preparation for them to find loving new homes on our rehoming scheme.”

While many plants can be poisonous if eaten to excess, there are some poisonous plants that horses should avoid at

“It’s vital that your horse doesn’t eat ragwort, and you can’t assume they will choose not to eat it,” said Ms Gordon.

“Spraying in April and early May while the plant is growing is the most effective way to eradicate it from your pasture, but you must be able to rest the field after spraying.

“For those without access to additional grazing, pulling the whole plant up — including the roots — is the next best option.

“It’s best to do this at the seedling or rosette stage, before the plant flowers and while the ground is still soft — so the sooner you act, the better.

“Seeds can remain in the ground for 15 years before germination, so even if you’ve removed ragwort in previous years, it’s important to do it again every year.”

Click here for more information on how to control ragwort