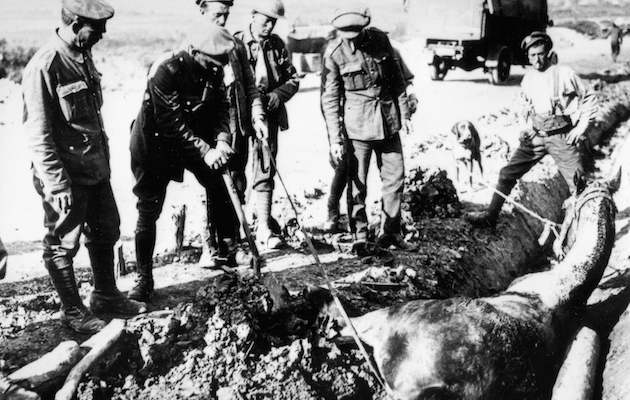 The Blue Cross is marking the First World War armistice centenary today (11 November) by remembering the indispensable contribution animals made to the war effort.

The pet charity has produced a short film to honour the role horses and other animals played in war — not only on the battlefield but also as companions with whom soldiers formed unbreakable bonds.

The charity, then known as the Dumb Friends League, reopened its Blue Cross fund on the outbreak of war in 1914. While the Red Cross brought relief to human victims, the Blue Cross came in to care for injured animals.

It set up veterinary facilities on the front lines, treating injured and sick horses and dogs involved in conflict. By the end of the war, the charity had treated more than 50,000 sick and injured horses and 18,000 dogs, funded entirely by public donations.

Horses formed the heart of the cavalry and were extremely vulnerable as they carried out their roles pulling gun carriages, wagons, ambulances and munitions trucks. By 1917, there were 869, 931 horses in active military service and it was estimated that when the war ended the following year, almost 226,000 of the equines drafted into the British Army had lost their lives.

Blue Cross deputy chief executive Steve Goody said:  “At Blue Cross we know animals change lives every day, but there is no time we see this more profoundly than in times of war. In the First World War animals were a huge part of the war effort, and we have an incredible archive filled with images and letters to attest to it.

“Blue Cross is immensely proud of the role it played in the First World War providing life-saving care to animals, as well as its work reuniting soldiers with the dogs they fought alongside and went through so much with. We think it’s vital to remember the lives of animals who were forced into battles that they had no say in, and to honour the role they played.”

Blue Cross has a tradition of recognising both animals and people for extraordinary acts. As well as its provision of front line veterinary care, in 1917 it also presented an award to Major Methuen of the King’s Royal Rifles for the rescue of horses under shellfire on the battlefield in France.

After the war, the charity continued its efforts and helped reunite many soldiers with the dogs they had befriended overseas and could not face leaving behind.

Remembering the greatest war horse of all, plus one cavalryman‘s extraordinary diary: see this week’s Horse & Hound magazine (8 November).