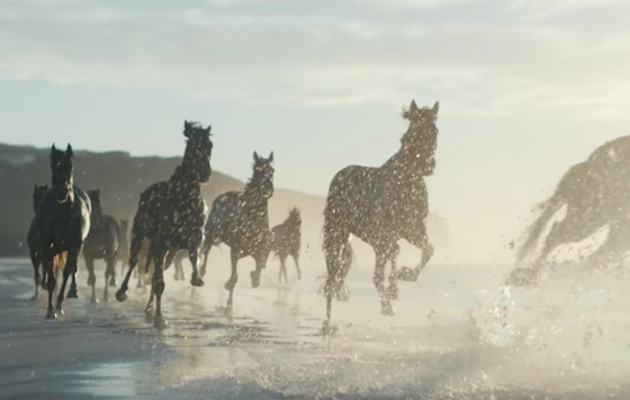 The iconic black horse has returned for the latest Lloyds Bank advert — and this time there are 20 of them.

The short film was created by adam&eveDDB, which also made the popular By Your Side and For Your Next Step campaigns for the bank.

Titled The Running of the Horses, the 60-second clip was released on Easter Sunday (1 April) and is a must-watch for fans of the Lloyds black horses.

The advert starts with a young girl being woken up in the middle of the night.

She leads her neighbours down to the beach in the darkness, where the viewer finally sees a herd of black horses galloping along the coastline as the sun rises.

The campaign is billed as “celebrating and showcasing the many different people and life stages supported by the bank. Young and old, friends and families, grandparents and new parents”.

The soundtrack is a cover of You’re Not Alone by Olive, recorded by Astræa.

A spokesman from Lloyds says this song “exemplifies the continuing and constant support that people want now and in the future”.

The advert will run across many platforms, including on television, in cinemas, online and on social media.

Find out how the new Lloyds Bank advert was filmed — involving The Devil's Horsemen, a cameraman riding a horse

“This latest chapter in our campaign shows the Lloyds black horse at its iconic best: powerful, dependable and there for every generation and community,” said Mat Goff, joint chief executive of adam&eveDDB.

Catherine Kehoe, managing director of group brands and marketing at Lloyds Bank, added: “In recent years our advertising has told the story of how Lloyds Bank has been by the side of families, businesses and communities in Britain for over 250 years.

“We continue on this journey, being by the side of our customers today, serving diverse generations, from young to old, parents and grandparents.”