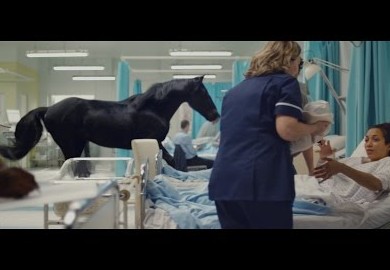 Lloyds Bank has followed-up its popular anniversary campaign with a new horse-centered advert.

The latest clip, titled “For Your Next Step” features the iconic black stallion galloping past customers as they reach major milestones in their lives.

It is produced by creative communications agency adam&eveDDB and is set to a cover of Tears For Fears’ Mad World, by musician Jennifer Ann.

“Whether they are planning a life together, starting a family, buying a new home, or dealing with the unexpected; the black horse is by their side,” reads a statement from the agency.

The 60-second film begins on a maternity ward in a hospital with a mother reaching to hold her newborn baby for the first time.

The black horse then gallops through a busy street, past a man proposing to his boyfriend and on to a funeral in the snow.

His journey continues by a busy playground, where a young girl nervously holds her father’s hand before the first day of school and through a fairground where a couple are about to take their first kiss.

“This is real life, but none of us are standing still. We are all about to take the next step,” says the voiceover.

The end of the advert features the baby’s first cries as he is held by his mother, the couple hugging to celebrate their engagement and the girl running off to make new friends at school.

“For the next step, we’ll be by your side,” reads the closing text.

The “Horse Story” advert pictured scenes of how horses have been used in everyday life from 1765 to today.

The idea is that in each of the scenes, the horses put people first.