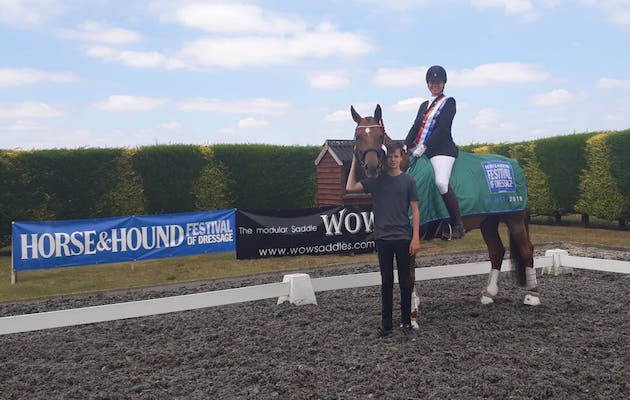 Camilla Zanna and Luca 192 continued their run of success at the Horse & Hound Festival of Dressage to claim the Wow Saddles Medium Championship title.

The pair continued to improve their percentages over the weekend, scoring 68.56% in the second championship test to take the overall win.

Camilla, who was attending the festival at Sheepgate with her son Kyle, beamed as she collected her prizes.

“I can’t even put into words how I’m feeling when you take into account the journey we have been through with him,” she said.

“I couldn’t have asked any more of him today. He got a little tense in our medium canter, but I was expecting that.”

The 11-year-old gelding has had a difficult journey peppered with illness and injury.

When Camilla bought him as a five-year-old he had grade four ulcers, which have required careful treatment and management.

Then in 2016, he ran through a fence, which resulted in a serious leg injury.

“I was told he would never be back competing again,” she said.

“He spent seven weeks with his leg in a full cast.”

‘I had three comments that said ‘needs more ground cover’, so that’s what I need to work on tomorrow’

Just three weeks before the Horse & Hound Festival of Dressage, the gelding injured himself again — rolling on a stone and opening up his elbow, which resulted in a stay at Rossdales Equine Hospital.

Thanks to tailored rehabilitation, he is back out and clearly enjoying his work.

“He is just amazing,” said Camilla, after the horse had stood perfectly relaxed to have his photograph taken while a vintage war plane passed low overhead.

“He is cute, cheeky and a fun person to be around — this weekend has been amazing, having Kyle here as well was fantastic and I couldn’t have asked for any more.”