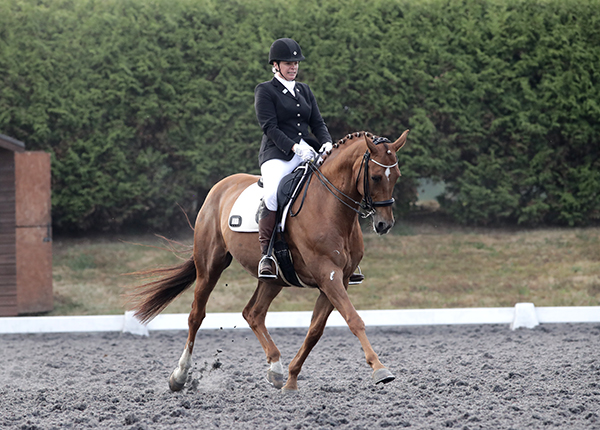 Camilla Zanna and Luca 192 continued their winning streak at the Horse & Hound Festival of Dressage to claim victory in the first test of the Wow Saddles medium championship.

The pair scored 67.41% to lead, with today’s Wow Saddles elementary class winners Lesley Wheatley and Furst Lazlo in second on 66.03%.

Catherine Barnes and Vorame are close behind in third on 65.43%.

“I can’t believe he has done it again,” smiled Camilla.

“He was a bit more tense today than yesterday — a bird scarer went off just as I asked for canter, but he still gave me some amazing work.

“My left half-pass is usually the one that lets us down a bit because he isn’t as supple that way, and today we got higher marks for that than the right hand side, so I was pleased.”

The 11-year-old gelding has made a remarkable comeback from illness and injury since Camilla bought him nearly six years ago.

He arrived with grade four ulcers and is accident prone, most recently cutting open his elbow after rolling on a stone, which required a spell in Rossdales Equine Hospital.

Meet the Charlotte Cooper and her Connemara star, Kildromin Sir

Camilla added the judges’ comments this weekend have also been really helpful.

“I had three comments that said ‘needs more ground cover’, so that’s what I need to work on tomorrow,” she said.

“Everyone has been so friendly here [at the festival] — everyone talks to everyone and the atmosphere has been incredible.”