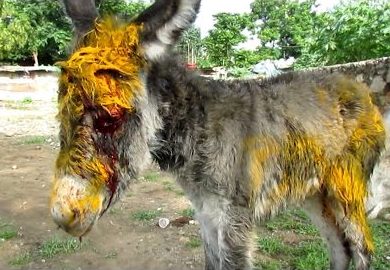 A donkey foal who was attacked by a wild animal has been rescued by a welfare group in India.

The filly, since named Genevieve, was found beside her mother with more than a dozen bite wounds.

Workers from Animal Aid Unlimited India came to the youngster’s aid, taking her to their sanctuary for treatment alongside her mother.

“This incredibly sweet, tiny donkey was attacked by a wild animal, and she suffered more than a dozen bite wounds,” said a spokesman for the charity.

“The shock alone might have been enough to kill her.”

However, through daily care, Genevieve has made a full recovery.

“Little Genevieve survived and thrived because of daily wound dressings and the incredible love her mother gave her every step of the way,” said the spokesman.

He added that without the charity’s intervention Genevieve could have died.

“Without emergency rescue, this almost surely would have ended in tragedy,” he said.

‘He was trapped in filthy water’

The equine was trapped in chest-high sewage after falling into a septic tank through a hole in the ground at a building site in India.

Rescuers had no idea how the donkey managed to fit through the small hole, which measured around 1ft square.

“He was trapped in filthy water for possibly more than 24 hours,” said a spokesman for Animal Aid Unlimited.

“If he laid down he would drown so he had to stay standing up.”

The hole was too small for the donkey to be pulled out through, so the rescuers used a pneumatic drill to break up the cement to enlarge the opening.

The team lowered a ladder into the tank and two rescuers climbed down.

The donkey was wrapped in blankets and straps were passed under his belly before he was pulled to safety.

He was taken by lorry to the charity’s centre where he was nursed back to health.