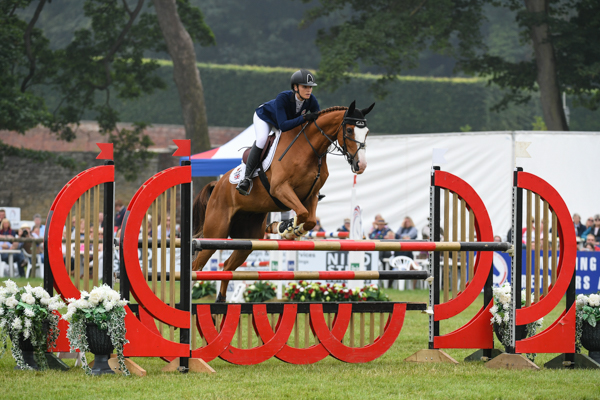 Emily King confirmed her victory in the British Horse Feeds under-25 CCI3* at the Equi-Trek Bramham Horse Trials today (Sunday, 10 June) with a clear showjumping round.

Emily and Jane Del Missier’s Dargun did not have a fence in hand when they entered the ring, but after rattling the first, they jumped a confident clear.

“He felt amazing today,” said Emily. “When I got on him in the warm-up he was bucking and squealing — it helps him with his spring and attention if he’s a bit jolly. He jumped well in the warm-up and carried that through into the ring.

“The crowd helps him rather than distracting him and the fences were quite spooky here, which helps too. He jumped consistently and was very focused so I couldn’t be happier with him.”

French rider Thibault Fournier moved up from third overnight to second with a fault-free performance on Siniani De Lathus.

“He’s a really good jumper, but I don’t know him well after a longer cross-country and I was afraid he might be tired and not jump as well as usual, but he was fresh today,” said Thibault.

Emily’s boyfriend Sam Ecroyd was second overnight on Jane Del Missier’s Cooley Currency, but he had the first two parts of the final treble (fence 12abc) down to drop to sixth. However Sam did jump clear on Vicki Irlam’s Master Douglas, who moved up from fifth after cross-country to third.

“I’m really happy with both horses,” said Sam. “Cooley Currency is still green at this level and coming here I didn’t think he’d even go inside the time across country. It’s a lot for a big horse to go 10 and a half minutes yesterday and then go into a tight treble at the end of a round of 12 fences, that can happen [having fences down]. But I hope the more he does, he won’t have that sort of problem.”

Chuffy Clarke and Second Supreme competing in the CIC3* at Barbury 2017. Picture by Peter Nixon

Tom Jackson, a former winner in this class, held fourth with just fence three down on Capra Du Buisson Z, while France’s Marie Caroline Barbier incurred a single time-fault on the lovely grey Picasso D’Oreal to move up from seventh to fifth.