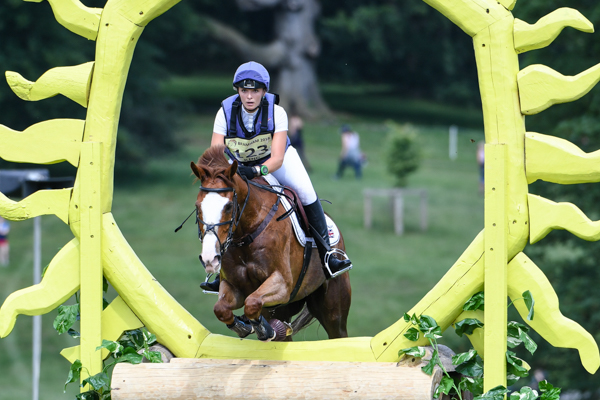 Dressage leader Emily piloted Jane Del Missier’s Dargun to a clear inside the time around Ian Stark’s course, although she did have to deal with being held after the Hollow while Melissa Townshend’s ride Straight Choice was extricated after his front legs slid into the trakehner at the Womble Bond Dickinson Pond (fence 21e).

It was the first time Emily had ever been held across country.

“It definitely helped Dargun rather than hindered him — he managed to catch his breath and started again fresh,” she said. “I knew I was 10-15sec up at the Hollow, which I had planned to be to give me time for the last water and because the final loop is undulating. I stopped my watch, but didn’t have it completely sussed, so I tried to just get back to the same pace.

“He was very good — he’s a very careful horse and today he was bold and straight.”

Emily’s boyfriend Sam Ecroyd was also held across country, but he too went clear inside the time to move up from fourth to second on Cooley Currency, another horse belonging to Jane Del Missier. He is also fifth on Master Douglas.

“I was lucky to be sat on two brave horses who both went very well,” he said, paying tribute to course-designer Ian Stark, whose tracks he really enjoys riding.

France’s Thibault Fournier finished one second over the time on Siniani De Lathus to rise from sixth after dressage to third.

Brits Nicholas Lucey (Proud Courage) and Charlotte Bacon (Last Touch) put in the only other fault-free performances in this class today and were rewarded with sixth and eighth overnight.

US rider Caroline Martin fell foul of the Womble Bond Dickinson Pond on both her well-placed rides. She was unable to make the turn to the second nest in the water on Danger Mouse (second after dressage) and so incurred 20 penalties and then had a similar problem on The Apprentice (fifth after dressage). Believing that she had made it inside the flag this time, she continued, but was later awarded 50 penalties when she was judged to have been outside the flag.

Whether your mount is a pony or a small horse, you'll find these seven problems all too familiar if you're

Katie Bleloch was third for Britain after dressage, but she had a refusal at the rail into the Hollow (fences 17 and 18ab) and then fell off tackling the long route.

Second Supreme, the ride of Chuffy Clarke, collapsed and passed away while competing in this class.