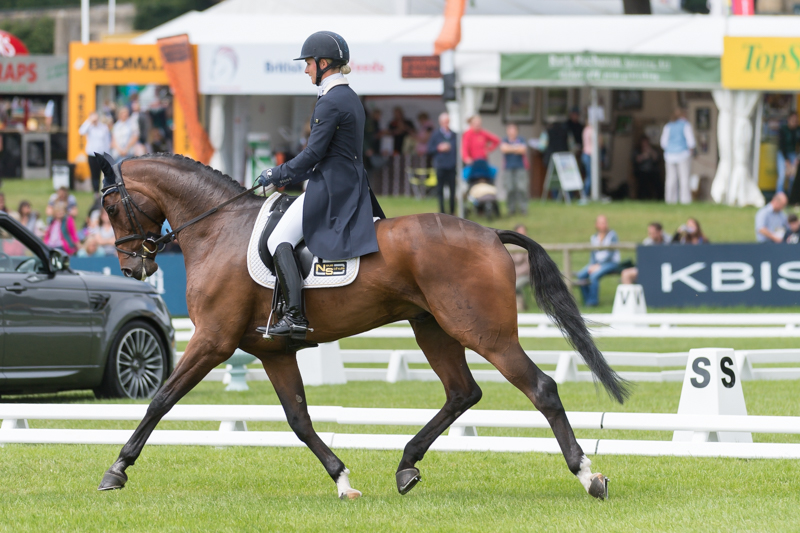 Germany’s Julia Krajewski retained her lead from yesterday at the close of dressage in the Equi-Trek CCI3* at the Equi-Trek Bramham Horse Trials.

The Olympic team silver medallist scored 19.4 and remains more than five marks ahead of the field on Chipmunk FRH, owned by Hilmer Meyer-Kulenkampff.

“I know he can do a good test but to have him that good in the big atmosphere is extra special,” she said. “He travelled well and has given me a good feeling the past two days — normally I’m complaining about something but the only thing I’ve had to practise is my halts.”

“It’s nice to enjoy a test — it’s a good sign if you can smile during it!”

Julia Krajewski and Chipmunk FRH lead the dressage in the CCI3* at Bramham. Picture by Trevor Holt / Kingfisher Media Services

France’s Matthiew Vanlandeghem held onto second place on 25.2 with Trouble Fete ENE HN and he was joined in the top three by compatriot Karim Florent Laghouag, who put in the best test today to score 25.9 with the experienced Entebbe De Hus, his team gold medal-winning partner from the Rio Olympics. The horse was castrated in December last year having competed as a stallion until now.

“We missed two flying changes which he usually does fantastically every time so I was hoping for better, but the trot was very good. I’m aiming to win!” he said.

Pippa Funnell’s test this afternoon with Barbara and Nicholas Walkinshaw’s Billy Walk On earned her 26 and best of the Brits in fourth after this phase.

“I’m really chuffed with him and it’s nice to feel a really good score [like Julia’s] is in reach if he hadn’t had the immature mistakes,” she said.

“He’s not always delivered, although he’s promised loads. He’s never tense and silly, but he can be unfocused. I’m happy with how he focused in the atmosphere today and that he wasn’t a clown,” said William.

Emily King and Dargun take the lead in the under-25 CCI3* after dressage at Bramham 2018. Picture by Trevor Holt / Kingfisher Media Services

The Olympic gold medallist will don team colours again to represent Britain in a Nations Cup, with team-mates including Ben

Kitty King was left slightly frustrated by Vendredi Biats, who “uses things like cameras as an excuse” and put in a big leap at the C end of the arena during the trot-work.

“He’s more than capable and can do some really nice work, but he definitely wasn’t really with me today, which was a shame,” she said.

Check back for a report on the under-25 class at Bramham on horseandhound.co.uk later today and more updates over the weekend, plus full report in next week’s magazine (issue dated 14 June).