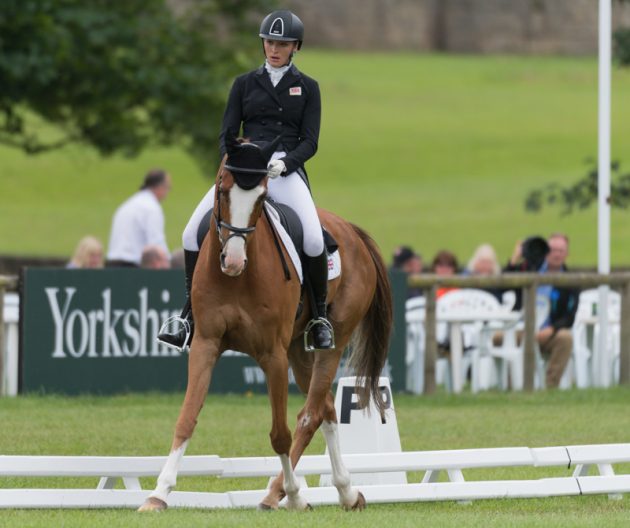 Emily King has taken the lead after dressage in the British Horse Feeds under-25 CCI3* at the Equi-Trek Bramham Horse Trials.

The young Brit’s score of 25.5 on Jane del Missier’s Dargun puts her 0.5 of a penalty ahead of the chasing pack heading into tomorrow’s cross-country.

“I’m super pleased — I didn’t get the halt before the rein-back, he wasn’t square and then he dribbled one more stride, but that was the only thing we didn’t nail,” she said.

“He’s changed so much in the past couple of years. As a young horse, he was really floppy and relaxed so you had to work quite hard. Now he’s got so much energy, it’s been a case of getting the balance right in terms of how much work to give him. I worked him for about 30 minutes this morning and then about 40 minutes before the test. He was really listening and the atmosphere enhanced his work in there.”

Emily King and Dargun take the lead in the under-25 CCI3* after dressage at Bramham 2018. Picture by Trevor Holt / Kingfisher Media Services

Looking ahead to tomorrow’s cross-country over an Ian Stark-designed track, Emily said: “It’s a proper, proper track and you’ll need a fit horse.”

US rider Caroline Martin holds second on Danger Mouse, who she rode yesterday, and fifth on her mount from today, The Apprentice. She is competing at Bramham thanks to the USET Foundation Karen Stives Endowment Fund Grant.

“These grants are life-changing — they give me an opportunity to practise being on a team which is important to me as I want to be a regular part of the senior team,” she said.

Whether your mount is a pony or a small horse, you'll find these seven problems all too familiar if you're

Julia Krajewski and Chipmunk FRH lead the dressage in the CCI3* at Bramham. Picture by Trevor Holt / Kingfisher Media Services

Pippa Funnell put in the best performance of the British riders today at Bramham, but no one could really dent

British rider Katie Bleloch holds third on a score of 26.9 with her own Bulano, the horse she rode on the bronze medal-winning young rider team last year. Fellow Brit Sam Ecroyd lies fourth on Cooley Currency (28.1)