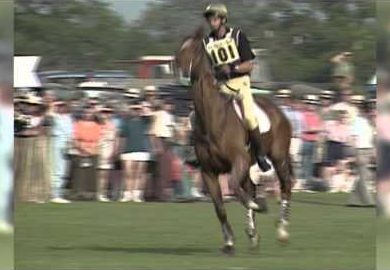 We’ve dug into the archives to mark this week’s Throwback Thursday by remembering one of Mark Todd’s hairier Badminton cross-country rounds...

The then 39-year-old New Zealander was  flying around the Badminton cross-country track with the 16.3hh gelding Bertie Blunt, when his left stirrup broke.

“Our cross-country round was pleasantly incident free until, landing in the dewpond near the Luckington Lane, I felt my left leg slip down sharply. The stirrup leather had broken,” Mark wrote in his autobiography So Far, So Good.

“My first thought was ‘Oh God, what is Trevor [Banks, who had been involved with buying the horse] going to say now?’ Instantly I realised that I couldn’t give up and would have to keep going somehow, despite the fact I was only a third of the way round with some of the hardest fences to come.

“The immediate problem was the Vicarage Vee, before I remembered with dread the horrendous coffin, with its short, awkward distances, but we got through that too. It took a few minutes to work out a method – I didn’t want to be banging around on the horse’s back — and eventually I found a reasonable level of comfort by hitching my left leg right up to the pommel of the saddle for the galloping stretches and dropping it to put my leg on over the fences. The jumping was almost the least of my worries; the galloping was excruciating.

“As we lurched toward the Lake, the situation was so surreal that I was laughing at the sheer ridiculousness of galloping down to one of the world’s most difficult fences with only one stirrup.”

Through sheer grit — and his outstanding horsemanship — Mark was able to complete the course. The next morning however, Bertie had some bruising to his foot and had to be withdrawn from the final horse inspection.

Following the announcement of his retirement we’ve dug

But after the drama of that year’s competition, the pair’s victory the following spring in 1996 was even sweeter.

Don’t miss 2 November 2017 issue of Horse & Hound magazine to read our next exclusive column from Mark Todd, or sign up to H&H VIP to read all of Mark’s exclusive columns online