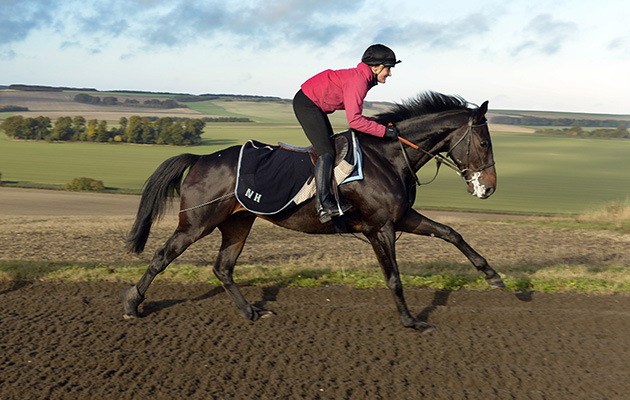 Yesterday (13 November 2016) Nicky Henderson announced the dual Champion Chase winner Sprinter Sacre's retirement. As we celebrate the National Hunt hero, find out how Lucinda Green got on when she went to ride the chaser back in 2013

Read what Lucinda had to say about her ride:

It’s just amazing the power these horses have. This is a really sensitive horse and a delightful horse to ride, but obviously completely terrifying because you’re so worried you will do something wrong and this champion of all champions will hurt himself. But I hope he has come back in one piece.

I was asked by Nicky to stay six lengths behind Long Run and that would be absolutely fine and Nick said, ‘don’t worry he’s quite strong’, anyway I didn’t manage six lengths, I think I managed two.

I’m just chuffed to bits to be in the presence of two such great horses let alone be on top of one of them.

Big Buck’s was a different horse all together. He was much narrower, he was much gentler. This one is such an enthusiast, he’s like a coiled spring from the moment you walk him out of the stable, I thought, good heavens, this is going to a rough morning.

I thought this is going to be interesting. I’d better do my stirrups in the yard because I won’t be doing them when I get near the gallops by the feel of this. I got them at what I thought was roughly short enough.

He was just amazing he’s just a bubble, he’s bubbling away all the time. When we turned to look down the gallop he was quite happy to wait at the very top of the hill with the world at his feet for the rest of the string to finish – they all finish on a sagging rein, I can tell you I finished on a tight rein. He does not have to make an effort.

And then I walked down and he was really bouncy to the start again for a second one.

I just spent a few minutes with him in the stable and he is the most loving horse, which I never got the feeling of [when I was riding him] because he was so up for it and go-getting it. But in the stable he just wants a cuddle and kiss – just divine – the sweetest horse.

I would love to jump this horse. I tell you why – I don’t feel safe on every horse I get on but he’s got such a beautiful high head carriage, in the right way, round, and this incredible shoulder and you sit right down low, low, low, so you feel really safe on him even though he’s bouncing all the time. He’s just delightful.