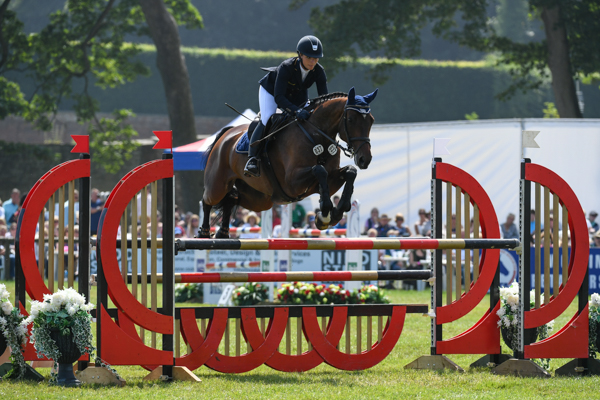 Julia and Hilmer Meyer-Kulenkampff’s Chipmunk FRH had two fences in hand entering the arena, but it never looked like she would need them and she finished the winner with 8.6 penalties in hand.

“When I was walking down I thought it would be really nice if he jumped clear, but he doesn’t always, so if he doesn’t, whatever,” she said. “I knew I had a fence in hand but I wasn’t sure about the other one, so I was just trying to go clear.”

“Obviously I’m delighted, the week couldn’t have been any better for me.”

Behind her, there was a dramatic leaderboard shake-up. The overnight runner-up, France’s Karim-Florent Laghouag had the first fence down on Entebbe De Hus to drop to fifth. And Oratorio II was fighting William Fox-Pitt so ended up lowering fences 4a and eight, sending him from third after cross-country to 11th.

A clear round propelled Andrew Nicholson and Diana Ridgeon’s Swallow Springs from fourth to second for New Zealand.

“He can jump well, but he’s been a bit green with the people in the showjumping in the past, but today he felt more secure and grown up,” said Andrew.

“At a one-day event he can be a bit fresh and keen and have a rail, but today he was settled and showed what he can do when he’s relaxed,” said Bill.

Emily King and Dargun win the under-25 CCI3* at Bramham 2018. Picture by Peter Nixon

Julia Krajewski and Chipmunk FRH hold their lead on the cross-country at Bramham 2018. Picture by Peter Nixon

The young German impressed over Ian Stark’s cross-country track today to maintain her top spot, while William Fox-Pitt moved up

Kitty King finished fourth and best of the Brits with a clear on Vendredi Biats, who belongs to Diana Bown, Sally Lloyd-Baker, Samantha Wilson and Sally Eyre. Richard Jones (Alfies Clover) and Gemma Tattersall (Santiago Bay) finished on their dressage scores for seventh and eighth, while Francis Whittington (Nimrod II) made it four home side riders in the top 10 in 10th.