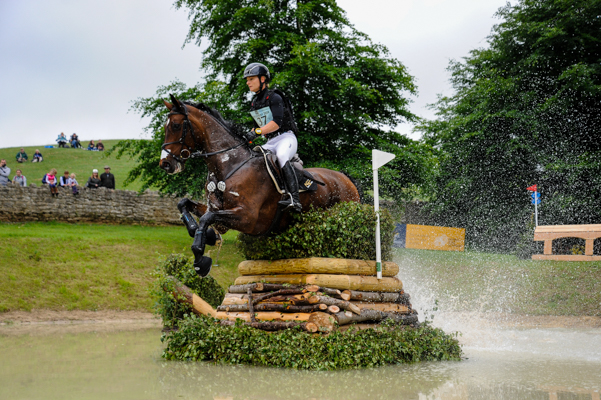 Julia Krajewski put in a faultless cross-country round at the Equi-Trek Bramham Horse Trials this morning (Saturday, 9 June) to maintain her lead in the Equi-Trek CCI3*.

The German rider and her mount Chipmunk, owned by Hilmer Meyer-Kulenkampff, were one of 10 pairs in this class to come home inside the 10min 24sec optimum time over Ian Stark’s cross-country course.

“He felt like he was enjoying it, his ears were pricked to the last,” said Julia. “I could take my time to set him up at the fences and give him one or two easier minutes.”

Julia Krajewski and Chipmunk FRH hold their lead on the cross-country at Bramham 2018. Picture by Peter Nixon

Julia now has a fence in hand going into tomorrow’s showjumping. France’s Karim-Florent Laghouag finished 1sec over the time today on Entebbe De Hus and moved up from third after dressage to second.

“He was terrific and galloped well. All the strides came up exactly as I wanted them to,” said Karim.

A clear inside the time also elevated William Fox-Pitt and the syndicate-owned Oratorio II into third, from sixth after the first phase. William — who was awarded an MBE in The Queen’s Birthday Honours last night — is now the best Brit in this class.

“He was a good boy — he’s still a green horse, but he has endless stamina and could have gone round twice,” said William. “My main concern was whether I’d be able to hold him and show him the fences, as he can be argumentative. But he was honest today and looking for the flags.”

Andrew Nicholson and Swallow Springs hold fourth for New Zealand with 1.6 time-faults today, while a clear in the time from Australia’s Bill Levett raised him and Lassban Diamond Lift from 10th to fifth. Kitty King moved up one spot to sixth with 2.4 time-faults on Vendredi Biats.

France’s Matthiew Vanlandeghem incurred 6.4 time-penalties today with the grey Trouble Fete ENE HN and so dropped from second to eighth. Similarly Pippa Funnell and Billy Walk On added 7.6 to their dressage score and so slipped from fourth to 15th. Pippa pulled up her first ride, MGH Grafton Street, after two early run-outs.

Chuffy Clarke and Second Supreme competing in the CIC3* at Barbury 2017. Picture by Peter Nixon

Nicola Wilson, 11th after dressage, had the save of the day in avoiding a fall when One Two Many had an awkward jump over the first bird nest at the Womble Bond Dickinson Pond (21b) but she then retired.