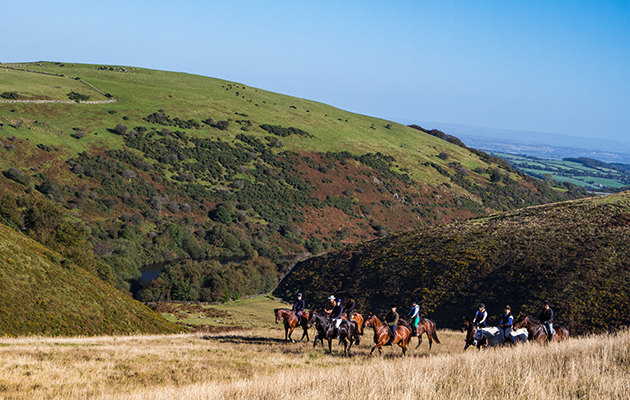 Camping with your horse at the end of September might not be everyone’s idea of the perfect way to spend a weekend, but Dartmoor has long held a special place in my heart, so simply hearing the words “Dartmoor Derby” immediately made me prick my ears.

With fond memories of family holidays that always seemed to involve a stop by the River Dart and more recent hunting trips on the moor with our own horses, this magical area intrigues me. For that reason there was no doubt the Dartmoor Derby was an event I wanted to learn more about so it was great to get involved in the pilot weekend.

The brainchild of Elaine Prior — founder of the Dartmoor-based riding holiday company Liberty Trails — the event was loosely inspired by Elaine’s experience of African riding safaris which she combined with visions of the Mongol Derby. Having not experienced either of these first-hand, I was able to take a fresh look at the whole concept and to enjoy it rather than making comparisons in my head.

The brief was that we would be riding approximately 25 miles per day on two consecutive days with an overnight luxury camping trip, with hotel stays the night before and the night after the ride.

Following a rendezvous on the M4 where I collected Lucy Higginson — former editor of H&H — and after a typical Friday-night motorway journey, we finally met up with other members of the group at the Arundell Arms in Lifton where we were all staying on the first night.

Radio DJ Sara Cox was one of the fellow riders joining visitors from America and different regions within the UK, all equally as excited to take on new horses and new country the next day.

We also learned that four-star eventer and Dartmoor Derby ambassador Lucy Weigersma would be joining us on Saturday night — perfect for those who wanted to ask her about her recent success at Burghley so soon after giving birth to her first child.

Part of the initial planning was to embrace the region by using local suppliers wherever possible and it was clear that this was a winning strategy after the delicious evening meal we all enjoyed. Breakfast on Saturday morning was a slightly more tense affair with perhaps the reality of what laid ahead suddenly dawning on everyone.

Clothing selection was one concern with everybody packing waterproofs and plenty of layers, but with the sun streaming through the windows it was clear they just weren’t going to be necessary.

With three groups heading off to different starting points we said our farewells and any last-minute fears soon melted away once the scenic drive across the moor to the stables commenced.

A number of horses were tied up in the yard when we pulled into Meldon, the home of Mandi and Phil Heard. It was reminiscent of days on the playground where two team captains picked their favourites when just two horses were left for allocation and my name was not called forward. I took one look at the remaining horse and shrugged at him before we tentatively made our way over to the mounting block.

Storm, a 16.2hh bay gelding could not have been a better ride for the whole two days. Sure-footed and agile with good paces and a nice, soft mouth; I think I had the best draw of all.

In fact, everybody who had horses from Mandi — in her first season as joint-master of the Lamerton — and her husband Phil who was our guide for the duration of the weekend, was perfectly matched and probably felt they were on the best horse in the yard too!

There is no doubt about it, the views on Dartmoor are just breathtaking and really must be seen to be believed.

I was delighted to be wearing a rather snazzy headcam provided by www.equine-productions.com in association with their technology partners Lyte. The super-light gadget had previously been used by jockeys in the Grand National earlier this year. Barely knowing it was attached to my hat was great, although at times I had to remember not to say out loud what I might have been thinking! Massive thanks to all those who made it possible.

With barely a cloud in the sky, we were seeing Dartmoor at its’ best.

Phil’s knowledge of the moor is encylopaedic and being a relaxed character, he has a knack of putting everyone around him at ease while instantly gaining their respect.

Although everything was meticulously planned with comfortable saddles (Western-style available upon request), it was refreshing not to be bogged down in too much health and safety talk before setting off, although we had all completed quite comprehensive forms regarding our riding experience some weeks prior to the event so nothing was left to chance.

At the risk of sounding like this was a gastronomic experience and not a riding holiday, lunch on the moor was a sight to behold. With 360 degree views of the moor and surrounding countryside, two of the three separate groups met up and were greeted by a white tablecloth and a wonderful spread including Caesar salad, homemade scotch eggs and individual trifles.

Everyone took it in turn to hold the horses and the on-call farrier also appeared to tap on a couple of shoes that had come adrift in the peat along the way.

Fed and watered we set off for yet more exhilarating riding across the moor and encountered some tricky terrain.

I was particularly grateful to be mounted on a horse that understood the steep banks with granite boulders and little narrow passes to get across brooks and bogs which are not an every day occurrence in the Shires. Our own hunters always instantly adjusted very well to hunting on the moor when we visited so I wouldn’t be afraid to take one of them another time. In fact, one of the hirelings in our group had only been over from Ireland three weeks and he was already crossing already the ground like a true native.

With about 25 miles under out belt, the first glimpse of the luxury campsite came into view along with the specially created individual turnout paddocks for the horses. For those considering taking their own horse, just knowing that your horse was not at risk of being kicked after a long day would help to alleviate any concerns.

Polly enjoys a canter on her Dartmoor Derby mount

Camping isn’t a passion of mine but thankfully the accommodation lived up to its “luxury” billing. The yurts were situated overlooking the most glorious valley with a river down below where the campfire and dining tent was set up.

Unbelievably, for those who wanted a hot shower these were available although on a hot afternoon, the river might have been just as tempting.

With three single beds inside, all with thick duvets and comfortable pillows, I was particularly delighted to see the heater, a delicious chocolate waiting on the pillow at bedtime and even an extension lead for plugging in my now-flagging mobile phone. Amazingly I managed to have phone reception for most of the day which was brilliant for sending pictures and keeping in touch but did nothing for my battery life!

Day two welcomed us with another sunny start and a breakfast buffet to rival any hotel offering. Quite how they managed to provide such delicious hot food in the middle of a field remains a mystery to me but those taking part next year can be sure they won’t need to pack any emergency rations in case of hunger.

The horses all appeared more refreshed and ready for their next ride than some of my fellow riders. Although there were no signs that anybody was suffering severely, there were definitely a few muscles that had been tested more than they had for some time. Any shoes that were lost on Saturday afternoon were magically replaced overnight.

The riding on Sunday was spectacular with views to die for at almost every turn. Lunch by Fernworthy reservoir was worthy of a painting with all the horses tied up to a rail while we picnicked nearby.

Although we were not crossing quite such demanding country as the day before, this enabled us all to kick on where the route permitted. Some groups even managed to get all four legs off the ground over a cross-country course they encountered en route.

Overall, the fitness of the horses was remarkable and there wasn’t one that showed any sign of fatigue after two long days.

Along with the rest of us, Sara Cox was buzzing at the end of the second day. We were all on a high, and nobody was quite ready to dismount and admit that it was all over, bringing back those emotions felt at the end of Pony Club camp when departing from your new friends.

After two long days in the saddle, it was sheer heaven to walk into Bovey Castle for our final night. The former manor house is a stylish and luxurious hotel with magnificent views all around. It was the perfect retreat for everyone to wind down over a delicious meal while recalling stories of the past few days.

It was a truly remarkable weekend and with options to camp, stay in luxury or mid-range hotels or a combination of the two, the Dartmoor Derby 2016 is definitely worth considering – see www.liberty-trails.com for more details.