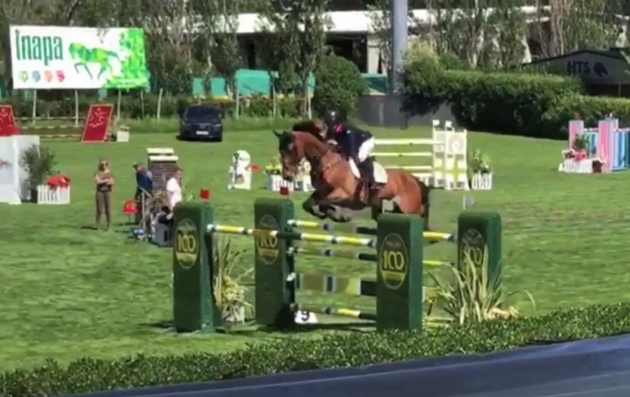 Our first senior Nations Cup competition is complete and it has been such a great experience as well as a huge learning curve.

I took my two main men with me thanks to Breen Equestrian and Team Z7 — Z7 Cordanos and of course Z7 Cash Up. Both boys travelled perfectly as usual and settled in really well.

As soon as we got there, we were straight into the trot-up. Even though I knew we would be fine (especially with the amazing team I have), there’s always a small part of you that holds your breath hoping there won’t be anything out of the ordinary that comes up. But both passed with flying colours and we were able to crack on.

Thursday gave us the chance to get in the ring on both horses. This was particularly important for Cash Up ahead of our team appearance the following day — it’s always good to get a feel for the arena and let the horses check out any spooky parts that may pose a problem. Nothing did this time and they felt totally on the job in hand.

Z7 Cordanos jumped a fab round in the 1.50m to come seventh. Cash Up had an unlucky pole in the 1.45m ending on five faults as we were just over the tight time allowed. But it felt like a good start to get us into the swing of the competition and give us some confidence going into the all-important team event.

Friday saw the Nations Cup and it’s safe to say there was a huge combination of excitement to be representing my country and nerves for the very same reason! You can see in my video that all teams parade around the arena and stand for their national anthem before the competition begins — an unbelievable experience. I’d have to ask the more seasoned team members if this ever gets old, but for me I don’t think I could ever tire of the amazing sense of pride it gave me standing there with my team (minus Jake — he was first in so was busy warming up), and that feeling will stick with me for a long time.

After the first round, Team GB were lying eighth out of 12 teams. Jake and Havinia van de Roshoeve had six faults, Amy had an unlucky two down for eight faults on Wishes and Ellen unfortunately got eliminated on Arena UK Winston. He couldn’t work out the narrow wall and refused giving Ellen no chance to stay on board. Luckily both horse and rider walked away totally fine, but quite rightly they decided to not jump the second round. So I was super proud of Cash Up to jump round clear but I did get another time fault! Although these are an annoying add on to a lovely round, I felt it was more important to get a clear under our belt and make sure he was feeling good than to rush round and risk unnecessary poles.

In a total reverse of fortunes, our second round just didn’t go our way. This was gutting, especially as the team was down to three riders, so we didn’t have the luxury of a drop score. Cash Up felt slightly unsettled going in under the lights, and not as focused as I needed him to be with this type of course. There was a bright screen behind a big square oxer on a related seven strides, and again I think this distracted him and he hit the top two rails hard. After this, he understandably lost confidence and we got eliminated shortly after.

Rounds like this aren’t what we hope for. But like I’ve said before, showjumping involves two athletes. If both horse and rider aren’t completely in sync, clear rounds don’t happen, and sadly this was one of those days for us.

Team-wise Amy and Jake both jumped good second rounds and were unlucky to come home with nine faults apiece. However, overall it was disappointing that GB ended the day with an elimination against our country’s name. As an athlete you must learn from mistakes and take perspective that a bad round is never a wasted round. As a combination, we are very much at the beginning of our senior Nations Cup career and I hope we will get another opportunity to really show what we can do.

Saturday was a new day, with Z7 Cordanos in the 1.50m. He gave me his all and was unlucky to finish with four faults. Overall, I was chuffed with how he went over the course of the show — he jumped really well and is an exciting one for the rest of the season.

On Sunday, Cash Up and I redeemed ourselves in the grand prix with a clear round but we picked up a pesky time fault again! But for me it was more important that he jumped a confident round. I was so relieved that he went back into the same ring and was totally unfazed by Friday’s hiccup.

Sport is a constant roller coaster of ups and downs, as strongly shown by my week in Portugal. But it was great to finish the week with my top boy back doing what he does best.