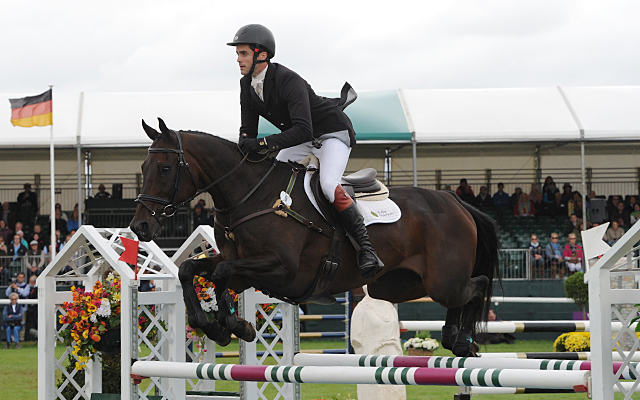 I am sat writing my final Land Rover Burghley Horse Trials blog in the Lorry on the way home, as ever I am late sending it in to the very patient Gemma at H&H. Luckily I have managed to persuade Sarah to drive the lorry home.

Today was a good day!

Galley Light came out this morning and trotted up outside the stables like it was Thursday morning which is a comforting sight for any rider. Ali Butler, who does all of our competition veterinary work was very happy with him so he then had a spot of physio to make sure he was on top form. It amazes me that having galloped for nearly 12 minutes the day before how these horses can come out the next day and do what they do; truly amazing animals!

We then headed up to the main arena for the final horses inspection. It’s a seriously long walk up there from the stables so all credit to those grooms who have been doing it all week.

Having been mortally offended not to make the H&H top 15 flirty outfits on Wednesday I was very pleased to get the best dressed male in my very natty Holland & Cooper two piece, alongside Ros Canter for the best female. We are both driving home with very nice magnums of Pol Roger! Although it’s only fair to point out that there wasn’t quite the same amount of competition with Tappers and Ben Hobday out of the mix.

After that excitement it was onto the showjumping. I walked the track with Peter Murphy and he thought it was going to be a strong test with some very square oxers and tricky distances.

Peter then warmed me up before going in. I find it so helpful having someone with the experience such as Peter’s there — he always has a plan for the warm-up. It’s far too easy to keep jumping and jumping in the warm-up on the last day. Despite my nervous clock watching we started jumping 10 minutes before I was due in and jumped eight fences at most. Galley went in and jumped a great round and just tapped one rail. I was thrilled with how well he felt and jumped. He did help me out at fence six but I like to think that just kept him focused for the rest of the round. In all seriousness he proved once again that he is a class horse on the last day.

Having watched the top 20 jump, there were poles hitting the floor all over the place despite some some brilliant displays of riding. It just goes to show how difficult it is to get all three phases right in our slightly crazy sport! However all credit to Christopher Burton who had given himself such a commanding lead gong in — you don’t see many four-stars won with four down!

It’s back to reality for me for the next two days as I will be heading into the office tomorrow morning. Although we are headed to Blenhiem on Wednesday to do the whole thing again with Willows Tipster.

Now that’s about it from me, and I am sure that by now you will have had enough of me waffling on! So to sum it up; not quite the Burghley I had hoped for, but then I suppose winning it on a 25 dressage was never going to be easy!