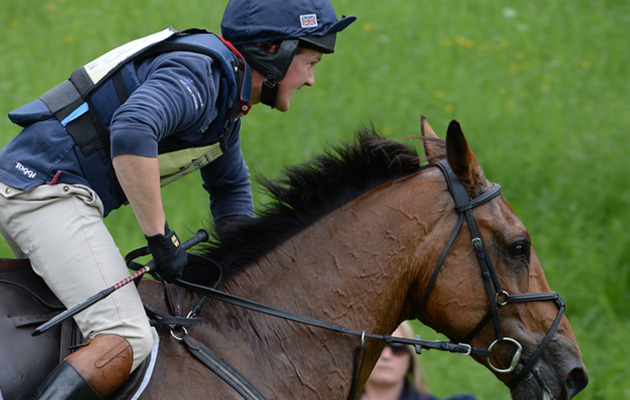 Tom McEwen added 2.4 time-faults across country to his leading dressage score to retain pole position in the Bishop Burton College under-25 CCI3* at the Equi-Trek Bramham Horse Trials.

“The course is so well built and the ground was perfect so it’s like going hunting — you can attack and have fun rather than fiddling around,” he said. “My horse cruised round really easily and finished super, with plenty of running and jump left in him.”

Bert Bolton holds second on the ex-racehorse Purple Sands after a very smooth round. They added nothing to their third-placed dressage score of 46.6. The horse was spun at the final trot-up here last year so Bert will hope for better luck tomorrow.

“I’m not proud that I came in 20 seconds under the time, but he’s a full thoroughbred and he was seriously up for it,” said Bert. “Usually when he’s like that if you let him gallop for a couple of minutes he comes back to you, but he didn’t today. But we didn’t have any issues.”

Tom’s time-faults mean that if Bert goes clear, the leader will not have a fence in hand going into tomorrow’s showjumping. If Tom wins, he will become the first rider to take this class twice — he was the victor in 2013 on Diesel.

It is a British one-two-three in this class as Sam Ecroyd has moved up from fourth to third after a fault-free round on Wodan III.

“A front shoe flew off at fence nine, so I was cautious on the turns and downhill, but he gave me a really good feeling,” said the 19-year-old, who was making his debut at this level.

Emily King was second after dressage, but she and Charlemagne had problems at the Investec Hollow (fence 14 and 15ab), a steep-sloped rail, ditch and triple brush arrowhead combination. They then retired.

The CCI3* time proved relatively easy to make over Ian Stark’s track today and six of the 19 starters in the under-25 class came home inside the 10min 10sec target. Eleven pairs made the time in the earlier senior CCI3*, which is being led by Oliver Townend.

There was a hold at the start of this class when the first out on course, Katie Bleloch and Bulano, had a fall at the Woodheads Seeds Offset Rails at fence 9ab. Both were up on their feet after the accident, but the frangible pin had to be replaced, leading to a short delay on course.