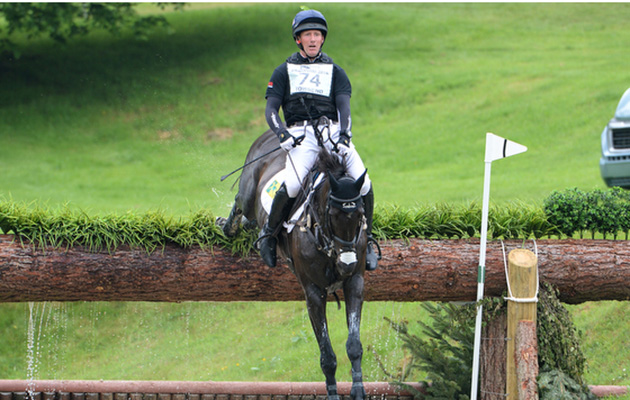 Oliver Townend has held his lead after cross-country in the CCI3* at the Equi-Trek Bramham Horse Trials.

The British rider and Tom Joule’s MHS King Joules finished nine seconds inside the 10min 10sec optimum time to add nothing to their dressage score of 37.9.

“He’s a very good horse — his gallop is endless and his scope is endless,” said Oliver. “I was told last night he’s out of the same mare as MHS Going Global, who is going to the Olympics with Greg Broderick, so let’s hope he jumps similar to him tomorrow!”

Both horses are out of the Cavalier Royale mare Gowran Lady. MHS King Joules is by Ghareeb.

Oliver was also fault-free on his first ride, Samuel Thomas II, who now lies 11th but pulled up Sandiman II (eighth after dressage) on course.

“He changed legs a couple of times and then went lame — we can’t find what’s wrong with him yet, but he hasn’t broken down,” he said.

Australia’s Sammi Birch — who is on the comeback trail after having a baby last year — was third out on course with Hunter Valley II and held her second place after dressage thanks to a jumping clear and just 1.2 time-faults. She is less than a showjump behind Oliver ahead of tomorrow’s final phase.

“It was nice to go early and not know what was happening, I could just go out and do my thing,” she said. “He was super — quite strong and fresh, which isn’t normally like him, but as he gets more into it he gets stronger and more excited about where he’s going.”

Sammi was then one of the last to take on the track with The Court Jester, equal third overnight, but had a problem at the step up at the Equi-Trek Round House (fence 6abc). She then retired after some further issues at the Woodheads Seeds Offset Rails (fence 9ab).

Andrew Nicholson’s clear inside the time with Deborah Sellar’s Jet Set IV at the end of the class gave him a rise of two places to third overnight.

Two younger Brits are hot on the heels of the top three. Lauren Shannon is now fourth after finishing just one second over the target with Quality Purdey, sixth after dressage. Ibby Macpherson has moved up from ninth to fifth with 1.6 time-penalties on Ballingowan Diamond.

Nicola Wilson and Bulana, equal third after dressage, had a run-out at the hedgehog on a bounce distance from the step up at the Equi-Trek Round House.

Sam Griffiths also lost a strong first-phase placing when he and Angelo IV (seventh overnight) had 20 penalties at the Investec Hollow (fence 14 and 15ab) and then retired after another problem a few fences later.

Ian Stark’s course — which riders generally considered to have been beefed up from last year — rode well, with problems spread across the track. The Woodheads Seeds Offset Rails at fence 9ab — two skinny silver birch fences with ditches in front of them on a downhill line in the wood at the far end of the course — was one of the most influential fences.