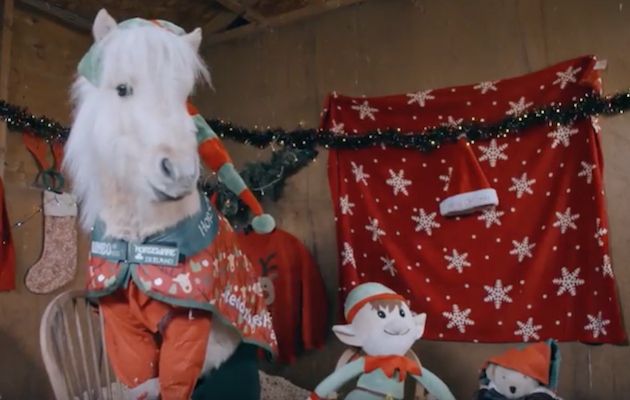 The diminutive Shetland stars in the advert for the Betfair Tingle Creek Christmas Festival, held at Sandown Park from 7 to 8 December.

The palomino pony dons some festive hats and rugs to replicate Elf and Home Alone before tugging at the heartstrings in an emotional portrayal of Love Actually.

Teddy takes on the role of Mark, played by actor Andew Lincoln in the 2003 Richard Curtis production, with a spaniel pal playing the role of Juliet, originally portrayed by Keira Knightley.

Teddy “works” the radio with his muzzle and sports the placards across his chest in a nod to the “to me, you are perfect” scene in which Mark declares his love for his best friend’s wife, Juliet.

The pony’s “day job” is as a therapy pony, visiting hospices, schools and nursing homes.

He has also participated in numerous charity events and campaigns as a mascot for Hannah’s Wilberry Wonder Pony Charity. He is owned by Alice Goring, H&H amateur of the year 2017, who works full time in osteoporosis research.

No stranger to the limelight, Teddy has more than 108,000 Instagram followers and can often be found on the guestlist to society events, including the Global Champions Tour in London and the Royal Horticultural Society Chelsea Flower Show.

‘The scale of Teddy’s achievements is really hard to put into words, even the great Nicky Henderson has had to

Teddy starred in the 2017 Tingle Creek advertising campaign, where the crisis of a double-booking with the farrier and a day at the races was avoided, meaning the pony’s racing dreams came true. He also played the part of a racehorse trainer vying for the championship title this spring ahead of the Bet365 Jump Finale at Sandown in April.

There are 10 entered for the Grade One feature race of this week’s festival, the Tingle Creek Chase.

The Nicky Henderson-trained star Altior heads the quality list of entries and is joined by Sceau Royal, Saint Calvados, Un De Sceaux, Min, Great Field, Special Tiara, God’s Own, Speredek and Gino Trail. The final declarations are at 10am on Thursday (6 December).