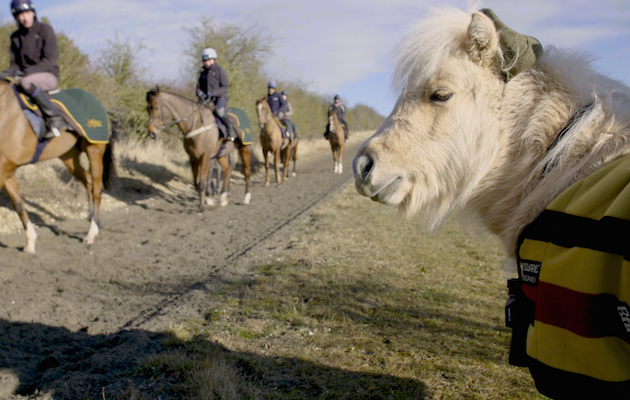 Nicky Henderson, Paul Nicholls or Teddy the Shetland — the race is on for the National Hunt champion trainer’s title.

A fun film released by Sandown Park racecourse follows the diminutive palomino Shetland as he makes a surprise entry at the top end of the championship league.

The viewer is taken on a tour of the pint-sized master’s top-class training facilities in Lambourn, as he watches his string trot around the arena before working on the gallops.

Dressed smartly in a Newmarket blanket and tweed flat cap, and sporting a pair of binoculars, Teddy looks every inch the part.

With work to be done, Teddy takes a quick trot around the yard before springing up the steps into his office to catch up on the latest racing news.

Champion jockey Richard Johnson, Nicky Henderson and Briony Frost are just a few of the famous names to praise the astonishing achievement of the extremely fluffy equine.

Little and Large! Metropolitan Police (MPS) Horses, Merlin and Quixote, were joined on patrol in central London by some special helpers, Teddy and Doris, ahead of their appearances at Olympia, the London International Horse Show. Tickets still available www.olympiahorseshow.com

Credit: All photos by REX/Shutterstock

“The scale of Teddy’s achievements is really hard to put into words, even the great Nicky Henderson has had to stand back in admiration.”

“All of a sudden he is just winning everything, and I don’t know what we are going to quite do about him — this time last year we had never heard of him and now he is winning everything under our feet,” said the four-time champion trainer.

Briony added it would be “amazing” to be legged up for “Mr Teddy”.

“A serious privilege that would be,” she added.

The 2017/18 National Hunt Champion Trainer title will be awarded at the Bet365 Jump Finale at Sandown Park on 28 April.