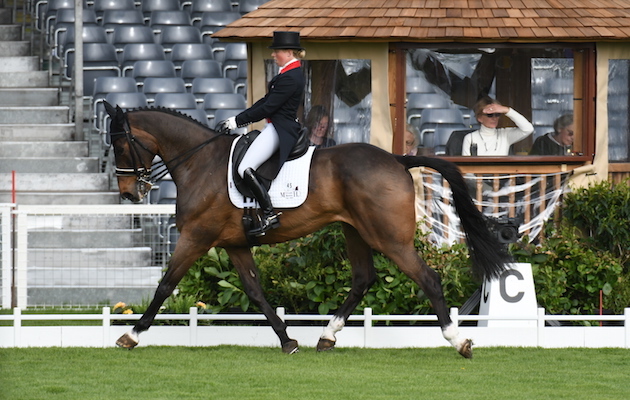 British rider Ros Canter has gone into the lead on the end of the first day of the Mitsubishi Motors Badminton Horse Trials.

Michael and Sam led for much of the afternoon on their score of 24.7.

The final combination of the day was Japan’s Yoshiaki Oiwa and The Duke Of Cavan — eighth here in 2017 — who sit in third overnight on 24.9.

This morning’s leaders Oliver Townend and Cooley SRS are now lying in seventh place on 25.9.

“I’m completely elated and very relieved — it was hard work in there and I had no idea about the marks until I had finished, so it was a shock but a great one,” Ros told H&H, adding Allstar B has been in a “great frame of mind” today.

“I’m extremely proud of him because a few years ago he couldn’t trot and he didn’t like the dressage. For him to put in a performance like that is just fantastic.”

Ros Canter and Allstar B are the overnight leaders after the first day of dressage. Picture by Peter Nixon

Michael added the going made preparations tricky with Sam, but he was particularly pleased with his canter work.

“It was not so easy this time to prepare him because of the wet ground, he doesn’t really like that,” he said.

“But he knows the job, he knows what he has to do and in the end I was very happy as he was very good to ride.”

Yoshiaki, who sits just 0.2 penalties behind Michael, said he was “really happy” with the way his horse went.

“I’ve walked the course and it is not easy — it is Badminton — I’m based in Germany, the weather conditions are quite cold and it is quite difficult to find a place to gallop,” he added.

There were strong performances across much of the field, with 41% of combinations who have previously competed at four-star scoring personal bests today, according to equestrian data experts EquiRatings.

Izzy Taylor and Perfect Stranger will be the first pair down the centre line tomorrow morning at 9.30am.