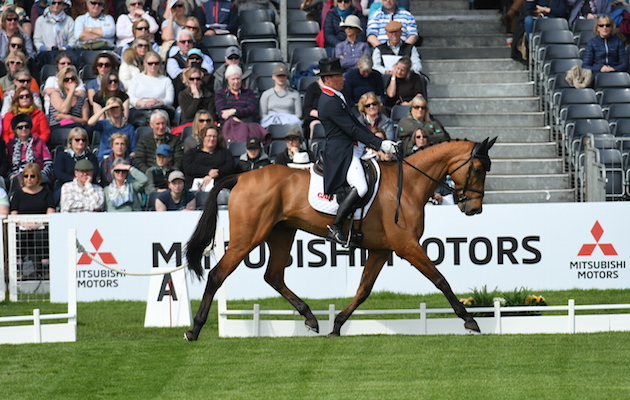 Rolex Grand Slam contender Oliver Townend is the lunchtime leader on the first day of dressage at the 2018 Mitsubishi Motors Badminton Horse Trials.

Oliver and the first of his two rides, European team gold medal-winner Cooley SRS, were ninth to go this morning, scoring 25.9.

Oliver, whose win at Kentucky last week puts him in contention for the grand slam title, is 1.5 penalties ahead of second-placed Gemma Tattersall on Pamero 4 on 27.4.

“The horse is at his first four-star, so it is nice to get through and feel that they have given their best,” Oliver told H&H.

“The horse made one mistake and I made another, but I’m happy with the mark and his overall performance.”

He added there is “no doubt about it” that Badminton is going to be “heavy going and a stamina test”.

“You are going to see a lot of action one way or the other, it is a serious course.”

This is a relatively new ride for Gemma, as the horse was campaigned by Laura Collett until March 2017.

“I’m delighted with the score, we made some pretty big mistakes, but also did some seriously lovely work,” she said.

“Pamero and I are still getting to know each other, so before today you could count on one hand the number of times I have been in an international arena with him.”

Mary King at The Lake on the 2018 Badminton Horse Trials cross-country course. Picture by Peter Nixon

“I’m very happy with his test, he just got a little bit tight in the walk, which messed up our halt and rein-back, but I think he scored pretty consistently all the way through,” said Mark.

“It is always hard when you go this early in the morning as the judges are never too excited about what they see, but from what I can gather, it was judged pretty fairly.”

Our bumper 24-page Badminton preview will be in our 10 May issue, including opinion from Oliver Townend, Mark Phillips and Peter Storr.