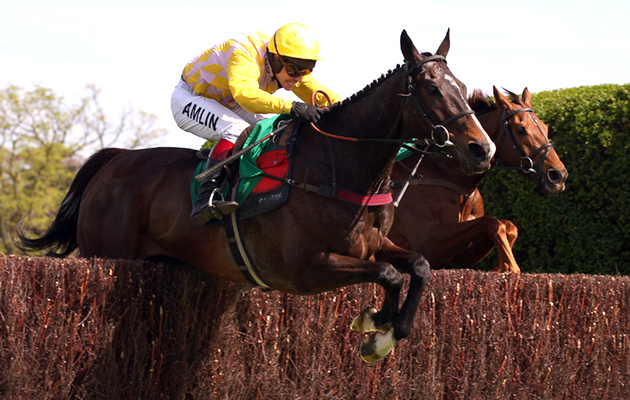 The shared challenges faced by racehorses and soldiers as they make the transition to “civilian” life are to be highlighted in a special parade at Sandown Park today (Friday 9 March).

Ex-racehorses Barbers Shop and Monkerhostin are to put in an appearance in the paddock ahead of the 155th running of the Grand Military Gold Cup.

Both horses are ambassadors for the Retraining of Racehorses (RoR) charity, as well as having connections to both the military and Sandown itself.

Monkerhostin’s career highlight was his 2008 victory at the track the Bet365 Gold Cup (pictured top).

His retirement from the track a year later coincided with Royal Marine Sergeant Major George Beilby’s return from his last tour of Afghanistan.

It was while visiting the gallops of trainer Philip Hobbs that Sergeant Major Beilby mentioned to his friend Johnson White, who works as the trainer’s assistant, that he was looking for a new riding horse and “Monkey” was recommended.

“I started riding him and I immediately began to identify that our lives were not that dissimilar. I have made this analogy before, but racehorses are in many ways like soldiers,” explained Sergeant Major Beilby.

“They live very disciplined lives and when they are asked to perform they are expected to give everything, yet they have arguably the least to gain from what they do and the most to lose.

“And at the end of their careers it can be quite difficult making that transition from out of racing and equally that also applies to soldiers, so I identified with him and the little issues and problems he was having in adjusting to life after racing.”

As the pair became more familiar with each other, something else became apparent.

“What I did notice though, and I’ve ridden lots of horses, is that there was something unique about Monkerhostin. Every time I went for a ride on him, I felt better, I felt like I had been on a bit of journey. And not only that, he seemed to come back feeling better also.”

Based on his experience with “Monkey”, the marine says he would recommend a former racehorse to any competent, confident rider.

“They are versatile, they are adaptable, they can do so many other things and I think there is probably a person for every thoroughbred out there.”

Barbers Shop, who will be parading alongside “Monkey” at the meeting, epitomises the potential ex-racehorses can have in their new career.

Owned by The Queen, patron of the Grand Military Steeple Chase committee, the Nicky Henderson-trained bay won eight times on the track, including a victory in the Listed Future Stars Chase at Sandown Park in 2008.

Following his retirement, he went on to become a superstar in the show ring, taking a string of accolades for producer Katie Jerram-Hunnable, including three wins at Royal Windsor, and the RoR final at Hickstead in 2013.

Di Arbuthnot, chief executive of RoR, said: “George’s story about his journey with Monkerhostin is a powerful and poignant one and testimony to the therapeutic abilities of a horse, particularly thoroughbreds.

“At RoR, we have already provided a horse to Horseback UK, the Scottish-based charity founded in 2009 with the aim of assisting wounded servicemen and women by introducing them to horses.”