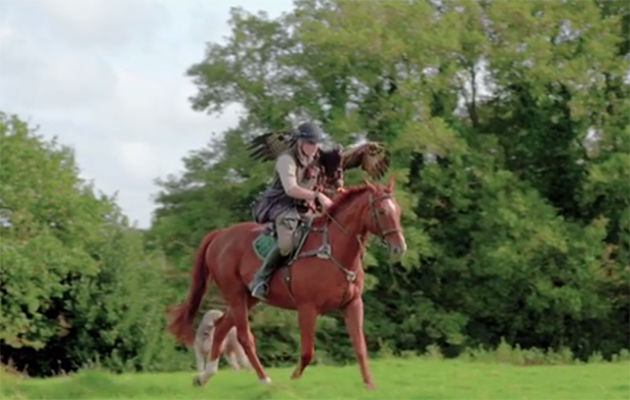 Ex-racehorses can be seen strutting their stuff in the dressage arena or flying across hunting country with ease — but settling into a new life working with a golden eagle on the wide expanses of Dartmoor is perhaps a little more unusual.

Ten-year-old former racehorse Shubaat, who was trained by John Ferguson and raced on the Flat and over jumps, is doing just that.

“Shubaat is a lovely stamp of a thoroughbred,” says Martin Whitley at Dartmoor Hawking, a falconry centre that gives clients an interactive experience with birds of prey. “He’s been here for two months now and we’re just working with him to work with the eagles. When you’re working an eagle with a horse, the horse is very much a launching platform and your carrying platform.”

The 2012 Musselburgh Gold Cup-winner is seen here with the golden eagle Artemis, who is used for the handling and flying sessions to teach people falconry from horses. She has a 7ft6 wing span and during the winter months is a serious hunting bird.

“This is Shubaat’s first introduction to the wide, open spaces of Dartmoor,” says Martin. “In another month’s time he’ll be out here around two or three times a week doing different activities with various birds of prey. He’s taking it all very, very well. His whole attitude is absolutely fantastic. He’s just been charging around a big open space that he doesn’t know, and he’s more interested in stuffing his face. That’s what we like.”

If you’re the proud owner of an ex-racehorse, you probably find you get asked the same old questions about your

Godolphin — the global thoroughbred breeding and racing team founded by His Highness Sheikh Mohammed bin Rashid Al Maktoum — places a big emphasis on finding new jobs for horses at the end of their racing career. The Godolphin Thoroughbred Rehoming scheme operates from Newmarket, where they retrain geldings to help them embark on an alternative career with a new owner.