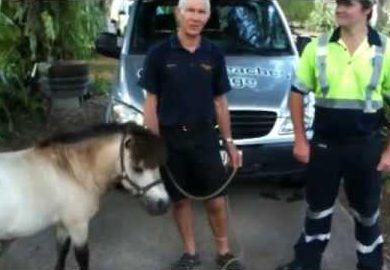 Don’t you just hate it when you manage to lock your keys inside your vehicle?

That’s just what happened to Australian owner William Simpson, except his miniature pony was already inside – and was the one responsible for the locked doors.

“Party pony” Mandrake was due to be taken home after attending an eight-year-old’s birthday celebration when he became trapped.

The eight-year-old stallion spent 40 minutes in the back of the van in Brinsmead, Australia, before a mechanic set him free.

His owner William Simpson had left his keys on the front seat of the van when Mandrake jumped inside.

Mandrake managed to lock himself in but was not distressed despite being trapped.

“He was very content in there,” said Mr Simpson.

“He piddled and pooed and filled the van up with really choice smelling stuff.”

Mr Simpson planned to smash the windows of the vehicle with a hammer to relase Mandrake, but rang roadside assistance company RACQ first.

Mr Whittaker said he “hadn’t had anything like it”.

“I’ve dealt with babies and dogs but not horses,” he said.

“I just wanted to know how a horse locked himself in a car because I had no idea.”

Mr Simpson believes Mandrake pushed the door lock down as he rested his head on the the windowsill.

“He was happy to be in the fresh air again and relived.”

Although this was the first horse rescue the Cairns RACQ team attended, the company has saved snakes, a chicken and even a goldfish in the past.