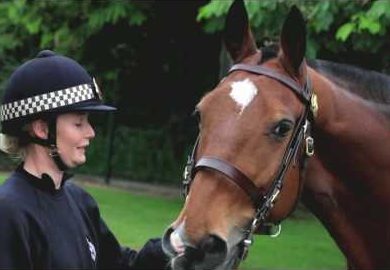 The trio — 18-year-old Pip, 19-year-old Harvey and 20-year-old Countess — will live out their days at the Horse Trust in Buckinghamshire.

A statement from GMP said “there was not a dry eye” at Hough End’s mounted unit as officers said goodbye to their equine colleagues.

“All of our horses have been a huge asset to the mounted unit and their work and bravery is crucial in helping us best protect the public,” said PC Kate Guest.

“They each have their own personality and characteristics and no two horses are ever the same.”

She added that “rock of the unit” Pip will always be her favourite.

Originally from Lancashire, the 16.2hh piebald joined the force in 2005 and has served at everything from Manchester United home-comings to protest marches, parades and riots.

“He is nicknamed ‘the stone wall’ because he is not scared of anything and although I have only been in the team for a year, he has been with me since the start,” said PC Guest.

“He has taught me everything I know about being a mounted officer and he has always made me feel safe, no matter what the situation.

“He is the granddad of the group and can be like a grumpy old man, but once he gets to know you he is so soft and sweet and loves being scratched behind the ears.

“He is a one-off and I won’t forget him or the work he has done during his time at GMP.”

Countess, who has served for 12 years, was the first of the three to join the force. She arrived in 2004 at the age of eight and in the past year, she worked with constable Karen Danks.

Meanwhile bright bay Harvey joined in 2013. He previously served with Humberside Police, but was bought by GMP when Humberside disbanded its mounted section.