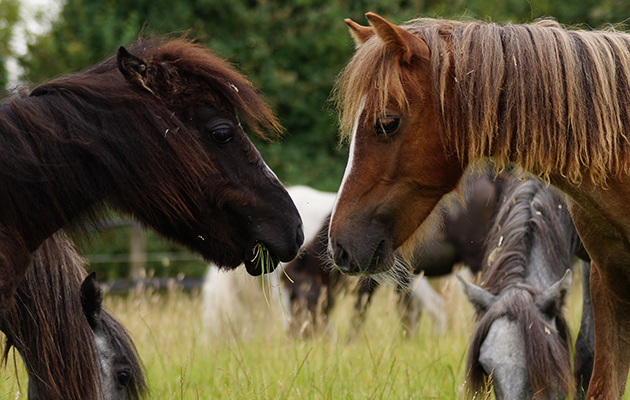 A sick pony who was given a 10% chance of survival after being rescued from Bodmin Moor has made a miraculous recovery.

Arthur, now dubbed Redwings’ Horse Sanctuary’s “miracle pony”, was among seven equines to be taken in by the charity following a two-day round-up in June.

Redwings, with Bodmin Moor Commoners Council, the RSPCA and the Animal and Plant Health Agency, helped rescue 14 suffering ponies from the moor on 16-17 June. This was the third large-scale round-up in the area this year.

Arthur had a severe worm burden and was “incredibly weak” when he arrived at the Norfolk-based sanctuary.

“There were a couple of times when I thought he wasn’t going to pull through, but he has this feisty, fighting spirit that failed to falter and made me think he had a chance at survival,” said Redwings’ welfare vet Nicola Berryman.

The colt was unable to stand for any length of time and needed 24-hour care. He was given steroids and a blood transfusion, and began to recover.

However, in mid-July he was found to have a high temperature and suspected infection, so was given antibiotics and a plasma transfusion.

Arthur pulled through again and on 10 August was reunited with his six Cornish friends as they were turned out together for the first time.

“His recovery continues, but he is now off all medication, which is unbelievable considering his condition even just a couple of weeks ago,” added Ms Berryman.

“It’s great to see him enjoying life with his friends and in a field with lots of lovely grass, which will help boost his recovery even further.”

The charity is planning to help the council with a three-day microchipping and passporting operation on the moor this autumn.

“Formal identification of horses will ensure those with grazing rights can do so and those who do not can no longer view the moor as a dumping ground – which has exacerbated the issue of overstocking,” said Nic de Brauwere, Redwings’ head of welfare and behaviour.

“Native ponies on Bodmin Moor should be allowed to thrive in their natural environment, but they cannot do this alone – that is, without effective management of the moor and timely interventions as required by the ponies.”