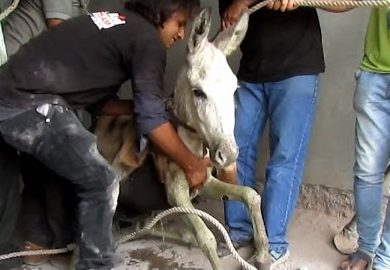 A donkey trapped in chest-high sewage has been saved by a team of rescuers.

The animal had fallen into a septic tank through a hole in the ground at a building site in India.

A team of rescuers from Animal Aid Unlimited did not know how the donkey managed to fit through the small hole, which measured around 1ft square.

“He was trapped in filthy water for possibly more than 24 hours,” said a spokesman for Animal Aid Unlimited.

“If he laid down he would drown so he had to stay standing up.

“We can’t imagine his sorrow and terror standing in pitch blackness with no way to cry for help.”

The hole was too small for the donkey to be pulled out through, so the rescuers tried to make the gap bigger by breaking the cement with a pickaxe, but the tool was not strong enough.

They then used a pneumatic drill to break up the cement and were able to successfully enlarge the opening.

The team lowered a ladder into the septic tank and two rescuers climbed down to help the donkey.

He was wrapped in blankets and straps were passed under his belly.

The donkey was pulled to safety by hand and as soon as the ropes were released he was able to stand.