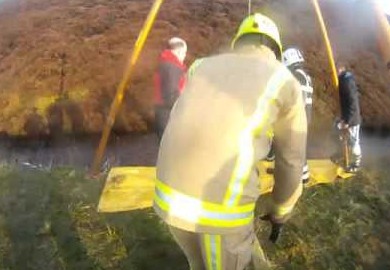 A stallion, believed to have been stuck in fast-flowing water for more than 36 hours, has been rescued by firefighters.

His owner Claire Robinson and her partner Lee Gibbison launched a search for the missing horse and the party were out looking for Frankie until 2am on Wednesday, 28 October. They finally located him at around 11am in a moorland culvert at Withens End Lane, Rishworth, Sowerby Bridge.

“We searched ourselves for quite a long time,” said Claire. “I was really worried. I thought he was going to be dead or someone had pinched him.”

Upon discovering Frankie, Claire tried to lead the stallion to safety, but was unable to free him from the water.

She called the emergency services and crews from Cleckheaton’s technical rescue team arrived just before 1pm.

A vet from Hird and Partners sedated Frankie while firefighters set up a tripod to winch the stallion to safety.

“The culvert was about 10 foot deep and runs about three miles,” said station manager Mark Allen. “The horse had been in the field next to the culvert and could not get out. It was a very unusual situation.

“We set up a tripod in conjunction with the local vet who did a fantastic job. He sedated the horse and we got in and put a headcollar on.

“We lifted the horse through the tripod system and left him in the hands of the owner and vet.”

Claire said Frankie is now “fine” and walked back to the safety of his field.

“The fire crews and the vet did a fantastic job,” she said. “I was panicking at one point that he would not make it because he was in there so long. I think he was in there 36 hours plus.”

Mr Allen said that with the heavy downpour the following evening, Frankie could have been in grave danger had he not been found when he was.

“Overnight, if the culvert had swollen with water, it could have gone over the horse’s head,” he added.

The rescue took over three hours to complete.