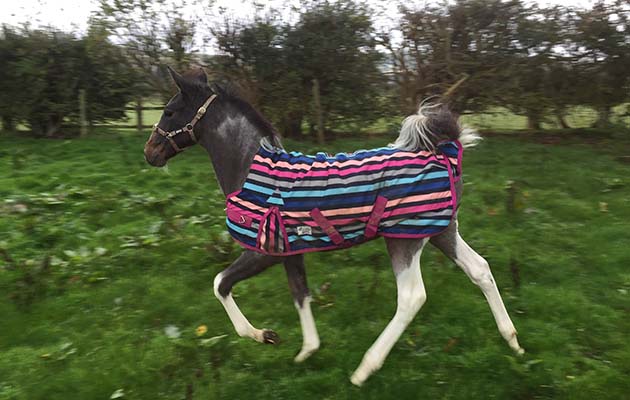 A veteran mare found emaciated and close to death has surprised her new owner by giving birth to a foal.

Connie, believed to be in her mid-20s, was rescued by the RSPCA in December in a poor state of neglect (pictured right) with a foal at foot.

She had been gradually putting on weight for six months in her new home when out of the blue she began to show signs of being in foal.

The following day (16 July) she gave birth to a skewbald filly, Miracle (“Miri”).

“I thought there could be no way she could be in foal — she had a blood test carried out by a vet when she was first rescued and it came back negative,” said Bedforshire-based Kate.

“But when she started lactating six months after being rescued, and the vet came out to examine her, he confirmed he could in fact feel two little hooves!”

Kate originally thought Connie would struggle to survive another winter, but her condition has improved to the extent that she can be ridden.

“I enjoyed every minute of nursing her back to health and never intended to ride her, but she responded so well in the first few months, I tried her with a saddle and amazingly we recently started hacking,” Kate said.

“Now with the arrival of Miracle, she’s proved she is a wonder horse.”