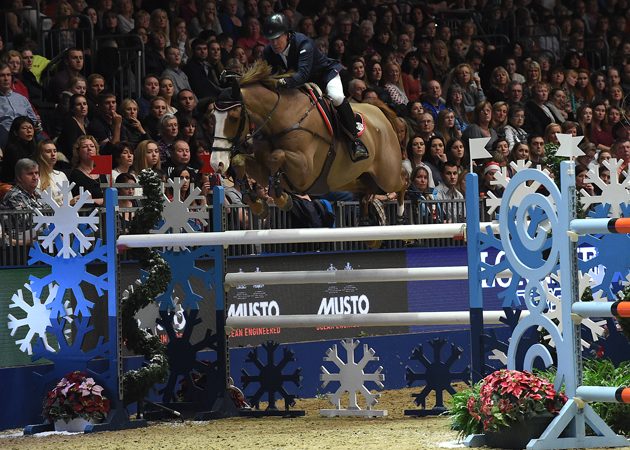 There was drama until the very end at the Olympia Horse Show tonight (21 December) when the winner of the Olympia Grand Prix, Bertram Allen was eliminated.

The Irish competitor rode a blistering round in the 15-strong jump-off on Quainton Stud’s Quiet Easy to finish double clear in a time of 30.45 seconds, nearly two seconds faster than his nearest rival, Michael Whitaker.

But as soon as Bertram left the international arena, the drama unfolded as it was discovered Quiet Easy had blood coming from a small cut on her offside caused by Bertram’s spur.

The 20-year-old was visibly emotional after it became apparent that he was eliminated.

“I’m utterly devastated, just speechless,” he says. “I have a fantastic relationship with all of my horses and their welfare is paramount. My foot must have slipped against Quiet Easy’s side as I was riding against the clock. He’s a sensitive horse and it was just a tiny nick,” he continued.

Bertram says that the discussion between the horse’s owners and officials in ongoing and that “they will probably appeal the decision”.

In a show of real sportsmanship, Michael Whitaker, who was promoted to the top spot as a result of the ruling riding the super-consistent 13-year-old Viking, gave his first place rosette to Bertram.

Michael said: “This is a bittersweet victory for me. Bertram won this really, and that’s the feeling among all the riders here this evening. This class belonged to him — I was second. I saw his horse when he came out of the arena and could barely see a mark on him.

“I’m very pleased with Viking though. He was fast and if it hadn’t been for me adding a stride to fence two in the jump-off I think I would have been a lot closer to Bertram’s time,” continues Michael who last won this class in 1992.

Second place went to Germany’s Ludger Beerbaum who was paying his first visit to Olympia in eight years.

Riding the impressive 12-year-old mare Chiara, the three-time Olympic champion clocked a double clear round in a time of 32.09 seconds.

Ludger said: “I’m pleased with my horse’s performance, but I’m not happy about the final result this evening. Bertram and his horse were the best combination in this class and they deserved to win. I had to put my glasses on to see where the tiny mark was.”

Third place went to Germany again. This time it was Marcus Ehning riding Gin Chin van het Lindenhof, who jumped clear in a time of 32.13 seconds.

Of the 32 starters, 15 jumped clear in the first round, with the middle part of the treble combination catching many riders out.

There were then eight clears in the jump-off.

Robert Whitaker was the next best placed British rider in sixth place riding Catwalk IV who jumped clear in a time of 32.43 seconds.

Scott Brash looked to be in with a chance riding Hello Forever, when a very tight turn to the second-last resulted in a stop.

For the full Olympia report, don’t miss this week’s Horse & Hound magazine, out on Thursday 24 December.