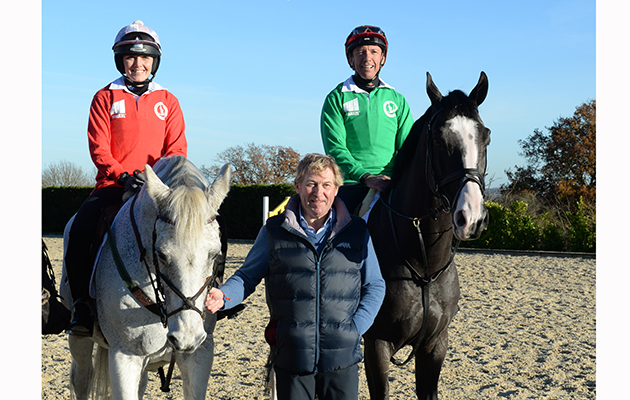 Legends of the racing circuit will be revving up the engines on Friday night at Olympia as two teams — Flat jockeys versus their jumping rivals — prepare to go head-to-head in what is sure to be the fiercest competition of the week, the Markel Champions Challenge.

Two time Derby winner Frankie Dettori and Olympic cyclist-turned-jockey Victoria Pendleton are two of the 10 intrepid jockeys who will be entering the starting stalls on the night, raising money for H&H’s charity of the year the Injured Jockeys Fund as they battle it out in a duel over the coloured obstacles.

Both Frankie and Victoria are complete showjumping novices, however, so H&H went along to watch double Olympic gold medallist Nick Skelton put them through their paces in a brilliant lesson over the coloured poles. So what did they learn? Here are just some of the day’s highlights — who is your money on now?

1. Frankie needs to slow down — or he’ll end up in a hedge

Keen to get on with things, Frankie goes from 0mph to fast canter in a couple of strides. “Right, I’m off,” he says confidently.

Nick says: “Slow it down, Frankie, although that probably already feels like a walk to you. Sit and wait for the jump to come to you.”

Frankie is riding “long” — Nick helped show him what length stirrups he should be jumping in, compared with his very short riding position on the Flat.

“And representing Italy…” says Frankie as he whizzes past, before attempting another set of fences.

“Steady now,” warns Nick as they approach a double. Frankie doesn’t listen and almost ends up in the hedge.

Frankie sums up what he’s learned: “It’s so interesting to listen to Nick, who very kindly organized this day, because it’s been bred into my mind to always go as fast as I can from A to B. So the main thing I’ll take away from today is just to slow down — let the horse take me there, not me chasing the jump. But it’s very hard when all your life you’ve wanted to go flat out.”

2. Victoria, meanwhile, is learning the art of applying the leg — ‘I’ve never needed an accelerator before’

Victoria has been lent a lovely grey showjumper, who took part in the jockeys’ challenge in 2014. He proves the perfect schoolmaster for the cyclist who only took up riding 18 months ago to finish fifth in a race at Cheltenham.

“Nick told me I’ve got to use a bit more leg — I’m so used to having such short stirrups and having quite limited ability to apply the old legs,” she says. “I know it sounds crazy, but actually using the leg for control is something that’s very new to me. And asking the horse to bend round your leg, to use the leg to keep the horse out, to support the opposite side… these are all things that I’ve just learned, so they’re not automatic yet!

“And the showjumping horse responds very differently to a racehorse — I’ve now got an accelerator and a brake whereas on a racehorse you only have the brakes to deal with because you’re always going forwards. This horse today was waiting for me to tell him what to do and I was like ‘Oh yes, sorry!’”

3. Tim Gredley has leant Frankie a rather nice horse for the big day…

Frankie Dettori is perhaps one step ahead of the game, having sourced a very nice international showjumper from his Newmarket neighbour, Tim Gredley.

Unex Barrichello (“Barry” to his friends) is a 10-year-old Heartbreaker gelding, who has been jumping with Tim and his sister Polly — and we’d quite like to ride him, too.

“I hassled Tim for about a month — I said I’m showjumping at Olympia and I’m a fish out of water, you’ve got to lend me a horse,” says Frankie. “And that really helped because even if I looked like I knew what I was doing today, I had no clue. I’m not sure if the horse is used to competing in front of thousands of people, but we’ll soon find out!”

Frankie laughs as the gelding expertly chips in an extra stride coming into a line of fences — “He’s got me out of jail!”

To keep things fair, Harry Skelton, on the rival National Hunt team, has also been allowed to ride Unex Barrichello on the night.

“Otherwise, if we beat the other team, they’ll say it’s because I had the better horse,” says Frankie. “So I’ve got no excuses now and it’s all equal.”
The pair finish the lesson with a very nice clear round.
“I’m wasted on the Flat!” says Frankie.

3. Victoria is a great listener and very determined — ‘I’ll give it my all’

Victoria takes a tumble when her horse refuses and whips round at high speed, but clambers straight back on with added determination. You can see her taking in everything Nick says, clocking it, then putting it in to practice. Counting and seeing strides is a new concept for both riders, and Nick spends a lot of time helping Victoria to keep her horse straight as they jump.

“When he goes indoors he’ll be anticipating every turn so try to keep him straight,” says Nick, placing a pole, then himself, for guidance.

“Victoria has come on brilliantly and if Nick hadn’t said it was time to finish, she’d have been there all afternoon,” assesses Frankie.

“He’s sweet to say I’m doing a good job,” she replies. “The way I see it, it’s the same as with the race riding — I’m a complete novice, but I’ll be as prepared as I can be and whatever will be will be. I’m not going to underplay the way I’m going to approach it, because I’m going to give it my all. I’m making up for lost time anyway — I love it.”

4. Despite being champions in their respective fields, both found this new challenge daunting

“Driving over here, I thought, ‘What if I fall off?’ — not in terms of getting injured, I just didn’t want to embarrass myself in front of all these people!” says Frankie.

“Three years ago, I was asked to do it [the Markel Champions Challenge], but I chickened out. Then last year we went to Olympia with the kids just to watch and I loved it, so I volunteered this year!

“It’s for a great cause with the Injured Jockeys Fund and as [Flat jockey] Freddy Tylicki had a very bad accident a few weeks ago, we wanted to keep the ball rolling and support our sport — as well as having the opportunity to ride against Richard Johnson champion jockey and the others.”

5. It’s going to be hugely competitive on the night!

“Obviously the jump jockeys must have an advantage, but we all ride horses day-in, day-out, so we’re going to be as fit as them,” assesses Frankie. “So I do rate my team’s chances — we’ve all been competitive all our lives, so when we get in there and feel the crowd and the adrenalin takes over, I know what’s going to happen — we’re all going to be so competitive with each other. But at the end of the day it’s all about who jumps clear. I’m ready for the challenge though!”

6. And the final word goes to… the legendary AP McCoy

The 20-time champion jockey was part of the winning jump jockeys’ team at Olympia in 2014 and was on hand at Nick’s to chip in with his own “useful” advice.

“I knew we’d find something you were good at doing at some point,” he said to Frankie with a grin, after he jumped a clear round over the full course of obstacles in Nick’s arena. “Now come on, do your star jump.”

And will we get to see the famous Frankie flying dismount on the night? You’d better start cheering on those Flat jockeys to find out…

The Markel Champions Challenge takes place at 6.45pm on Friday, 16 December, at the London International Horse Show at Olympia