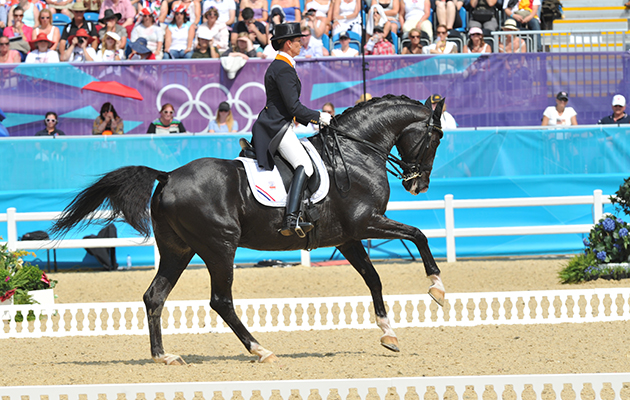 At the recent Global Dressage Forum held at the Bartels Academy in Holland (26-27 October), seven horses were put forward as the best the sport has ever seen — including Salinero. Find out what made the gelding so special

In the early days, Anky thought the large, black Salinero was “too big, too strong and too ugly”. But she persevered with the ultra-sensitive gelding as his talents emerged.

He was always a hot horse and Anky used to ride him for at least an hour a day — sometimes an hour and a half.

“He always had a lot of energy,” says Anky, who still rides the horse in his retirement, his last test having been in London 2012 during which he helped the Dutch team to bronze.

When he was fairly new to grand prix, in Rotterdam, the pair’s grand prix test was badly marred through tension because the horse was frightened of the clicking of the photographers’ cameras.

Before the next test, Anky remembers taking him into the warm-up and asking everyone she knew with a camera to come and click near Salinero.

“We clicked and clicked away and even right next to his ears until he thought it was totally boring,” she says. “We put a lot of energy into fixing that.”

He was 10 when he went to his first Olympics.

“I didn’t plan on the 2004 Olympics, but managed to qualify at the last minute and we were selected,” remembers Anky. “I was thrilled with how he managed despite his young age and I had no expectations.”

Remarkably, the horse went to three Olympic Games and never came away without a medal. He attended four World Cup finals between 2004-2008 and won them all.

He has a fantastic front for a dressage horse, with high withers, a long shouler and a naturally arched neck.

“The way he moved, it was really his inner qualities on show, because he really wanted to do the work,” says Anky.

His conformation certainly made the horse’s job as a dressage performer easier, despite his showjumping pedigree. He has all the willingness and attitude to perform.

However, halts were never his strong point, and extremely brief or non-existent halts are now referred to as “doing an Anky” as a result.