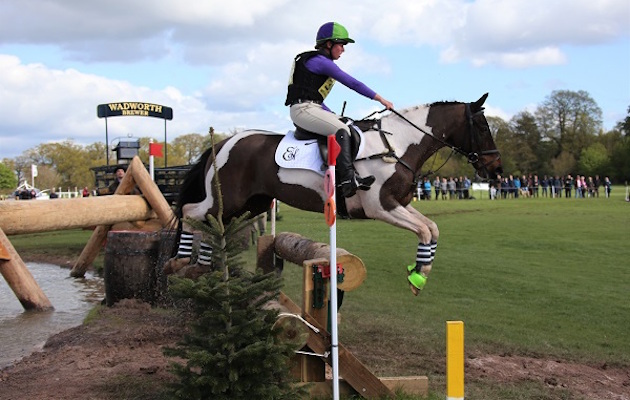 Wow, what a day! As I write this, I’m sat outside in the glorious sunshine, enjoying a glass of champagne while reflecting on what an incredible day it has been. Especially considering how it started.

We arrived yesterday afternoon and after settling Charlie in to his accommodation myself and a friend set about assembling our own lodgings for the night, that is my rickety old Ifor Williams 510 trailer. Said friend, Emma, has groomed at the highest level in both eventing and showing and as such has stayed over in some very fancy lorries over the years, so I imagine whilst we both lay awake in the early hours to what sounded like apocalyptic wind and rain, she was beginning to question her life choices.

When I went to feed Charlie at 6am the ground was a bit soggy. By the time I went in for my dressage at 10.12am it was waterlogged. The arena resembled the Somme with a particularly deep trench carved in to the centre line that Charlie was doing his utmost to wade through.

My initial plan was to really go for it, be brave with the movements and take all the risks in the hope of scraping some extra marks but as we were wallowing our way through the mud, it became clear that our best hope instead would be to be as accurate as possible.

While I didn’t feel it was a great test I was nonetheless pleased with how hard Charlie tried for me. He doesn’t like dressage, it’s a well-known fact, but taking into consideration the conditions, I couldn’t have asked any more of him and when I saw our score of 34.8 I was very happy indeed.

Thankfully the sun finally made an appearance around lunchtime and the ground did begin to dry, however the show jumping was still causing carnage and when I entered the ring just a little before 3pm I was having flashbacks to that god-awful round we had at our last event.

Charlie’s mind, on the other hand, was somewhere else. As I popped him up to canter and turned to the first fence, he took hold of the bit, more or less said: “don’t worry, I’ve got this”, and proceeded to tow me round.

Despite this, I was still in defensive mode and the combined result of Charlie pulling and me trying to hold him together did result in a rather amusing round.

A particular highlight was Charlie taking an enormous leap at the third fence and me calling a taxi for two in the process. I am so pleased with how he jumped, he was completely back to his old, cocky self and we just had the one jump down where I insisted there was another stride and Charlie thought otherwise. Big pats, a cheeky carrot, and it was cross country time.

With only three others in the warm-up, we didn’t have long to wait, which suited me just fine as that meant less time to worry about all the fences Charlie might stop at.

Three, two, one and we were off. I felt him look at the first fence so rode it quite strongly and then once over that he settled in to a nice rhythm and knuckled down to do the job I have so painstakingly tried to teach him over the past fourteen years.

Fences three and four brought us galloping down in front of the main house and I had a quick “oh my goodness we’re at actual Badminton going actual cross country” moment although I didn’t have long to dwell on it.

Five, six and seven at the lake came up quick — and Charlie didn’t half make me work hard to get him over them. After a couple hair-raising moments we were out over seven, a rail coming out of the lake but by then I had completely lost my bearings and cantered merrily past 7B!

On realising my mistake I executed a rather tight turn, though there was no way to avoid crossing my tracks, and over we popped with the addition of a technical run out added to our score.

It was a short gallop over the table before we were faced with our next question, and arguably one of the most influential combinations on the course. Nine was the KBIS angles and they had already claimed their fair share of victims throughout the day, not to mention as one of the later riders around the course the ground deteriorating fast.

I had a good shot over part A, a big roll-top brush and then lined us up for the two angled skinnies. I felt Charlie have a little look, and prepared to give him a tap down his shoulder when instead all I managed was to get my whip tangled in my knitting and resigned to flapping instead. What a star Charlie was. Ignoring the strange happenings on his back, he popped the first one and then autopiloted through the slight bend jumping the next with ease, before galloping away very pleased with himself.

He made light work of the fences that followed and I was so proud of how he tackled the Shogun Hollow coffin combination. Having earlier nearly fallen in it myself when walking the course, I can confirm that ditch really is very wide and very deep and yet Charlie didn’t look twice. Popped the rail in, big leap over the ditch and back over the rail out all like a complete pro.

We had a bit of an unfortunate moment at the CrossCountry App rails at 16AB where the steep approach to part B, a big brush corner, was a quite literal slip and slide. I think it was the combination of a slightly off line and the very deep take off that led to Charlie attempting to jump but then glancing off it to the right taking the flag with us. He popped over it second time and, after skipping through the final combination of step to skinny at 18AB and two further straight forward fences it was off to face our nemesis.

The final fence, a bright white book at 21. It was looking especially blingy in the sun and as I approached I was willing for some cloud cover to appear overhead but there was no such luck. I gave him a tap on approach, and another three strides out an for a moment it felt like he was going to go but then, well, he didn’t! Monkey!

As I turned him round to represent I said quite loudly: “I knew you were going to do that!” much to the amusement of the spectators who then gave us an almighty cheer when we jumped it successfully on our second attempt and galloped on if not clear, then at least home.

My aim was to complete and we had done it, I am so over the moon with Charlie, quirky git that he is, the old boy did me proud.

Huge congratulations to the victors, Laura Burton who took top honours in the 90 class and 100 winner Lois Teal.

I really hope you have enjoyed reading these blogs as much as I have enjoyed writing them and I have been overwhelmed by the support and well wishes I have received since.

If you’re reading this and thinking: “I want to go to do that, but I can’t get him around a 50cm course” — please keep going. It wasn’t so long ago that that was me.

Read our full Badminton preview in the current issue of Horse & Hound (issue dated 26 April 2018), with course walk insight from Mary King plus full form guide for every horse and rider

Our bumper 24-page Badminton preview will be in our 10 May issue, including opinion from Oliver Townend, Mark Phillips and Peter Storr.