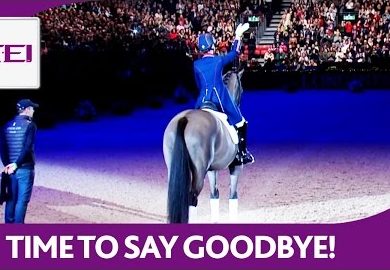 Valegro fans who missed his sell-out last performance at Olympia can watch it again on special video footage released by British Dressage (BD).

The half-hour film shows the gold medal-winning London 2012 freestyle ridden again by Charlotte Dujardin on 14 December under the Olympia lights, and the retirement ceremony, from Wednesday, 14 December.

Interviews with Charlotte, Carl Hester and Alan Davies recorded at Olympia after Valegro’s emotional performance are included in the footage.

“It’s indescribable how everyone feels about this horse; he’s one in a million,” said Carl Hester.

Valegro’s groom Alan Davies said the last few days before the Olympia performance had been “a complete rollercoaster.”

“It’s crazy, he’s not going anywhere, but the wave of emotion from the public behind us with this horse is just incredible,” he said when interviewed.

The spectacle of the legendary 14-year-old Negro gelding’s last appearance was watched by thousands of fans across the world as the BBC and FEI TV streamed the memorable occasion.

“Valegro has done so much for British dressage and we’re incredibly privileged to have witnessed this horse within our lifetime. He and Charlotte have taken dressage to the next level. Not only is he enormously talented, but the harmony between him and the equally skilled Charlotte is exemplary — they’ve simply been a joy to watch over the years,” said BD chief executive Jason Brautigam.

“On their path to becoming multi world record holders and winning every championship title going, they’ve shown the way to a style of performance, which many riders now strive for. And not only have Charlotte and Valegro been admired across the dressage world, they’ve also brought dressage into the mainstream media and into the hearts of the British public.

“It was an emotional occasion seeing Valegro retire yet so uplifting seeing him go out at the top of his game. Thank you Valegro, we wish you a very happy retirement.”