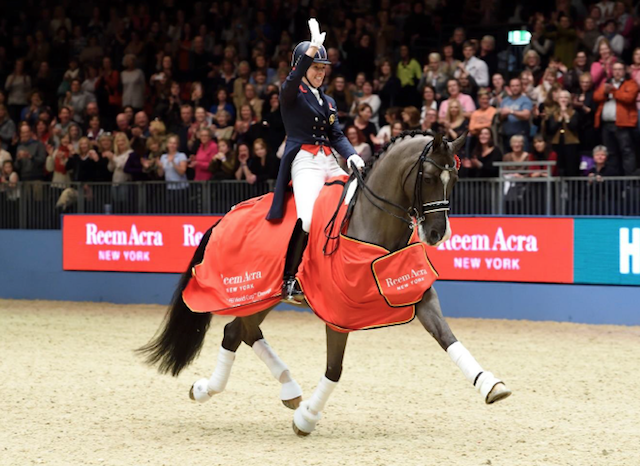 As the equestrian world prepares to watch dressage sensation Valegro retire at Olympia tonight (14 December 2016), take a look back at his top five moments in the history of the FEI World Cup Dressage. Handkerchiefs at the ready...

Valegro and Charlotte Dujardin may have hit the front pages of the national newspapers in 2012 and 2016 for their show-stopping Olympic performances in London and Rio respectively, raising the profile of the sport in unprecedented ways, but it is also their record breaking performances in the FEI World Cup Dressage series which have captured our imaginations.

5 of Valegro’s top moments in the FEI World Cup Dressage. Counting down…

As well as being Charlotte’s first World Cup final, she was also riding her new freestyle for the first time, to music from the animated film How to Train Your Dragon.  “The music’s so great — I literally felt like we danced our way round,” said Charlotte. “I was so emotional at the end, he gives me so much and that’s all you can ask.”

At Olympia Horse Show in December 2013 Charlotte and Valegro scored 93.975% in a faultless freestyle performance that saw them set a new world record. “I came here thinking the world record was what I wanted to do — thinking it and doing it is something else. I had the ride of my life,” she said.

In Las Vegas on 17 April 2015, the pair scored 94.196% with a flawless grand prix freestyle to take the Reem Acra FEI World Cup dressage title for the second year in a row. “I’m living the dream,” said Charlotte at the time. “Coming here and doing what I do in front of 12,000 people is an incredible feeling. I never knew how Valegro was going to cope with the clapping, but he loved the American crowd — every time they clapped, it was like he was saying ‘Woohoo, I did something good.’”

But it was at Olympia in 2014 that the golden duo beat their own world record for the grand prix freestyle, with a score of 94.3%. “I was thrilled with the ride and I had so much fun out there,” said Charlotte. “However much I want from Valegro, he just gives it to me.”

Don’t miss our special Valegro pull-out available with the 22 December issue of Horse & Hound magazine, where we celebrate his career