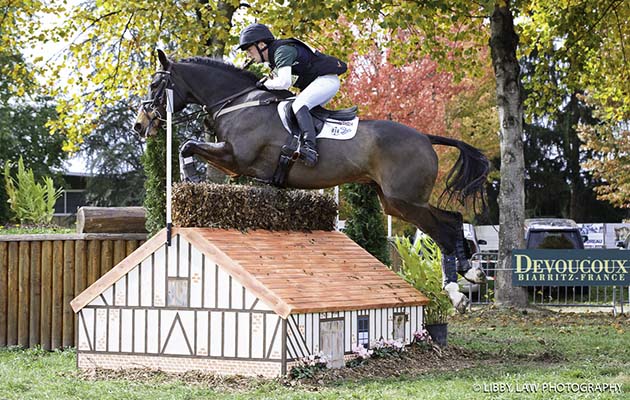 Eventing is always such an up and down sport. I was flying high after a fantastic test and very excited to tackle a very strong CCI4* track. Having walked the course (see video above), the distances were long and I was sure that Bozzie (Cornacrew) would add an extra stride in every one of them.

I took him for a hack on Saturday morning with Emma Hyslop and he was unbelievably excited. I did my final course walk with Laurence [Hunt] before getting everything ready with my good friend Vic (who came to support this weekend) for the off.

Bozzie jumped out of the start box with his usual vigour. He cruised over the first few big fences, making them feel really easy. I rode for an extra stride at six and it came up perfectly for him. Then he whizzed down to the first water where we added a stride in each distance, but he made it feel as though that’s how it was designed to be jumped!

He was flying and really jumping as we came into the seventh minute of the course. I looked at my watch and we were around five seconds behind the clock. Things were looking good!

We added another stride at a double of angled brushes, but again he made it feel easy. He was so confident. He was feeling like he could take on anything, but as I approached the five bar gate at 18 I could feel him suddenly tire. It was quite hot and he was sweating well.

We approached the very difficult second water and I set him up for the direct route. He jumped through, but with a lot of encouragement from me. He bust a gut for me staying on his line like the pro that he is. We landed, exited the water and I patted him. We still had a long way to go – should I pull him up?

I thought maybe he would get a second wind and as the next minute was solely galloping with one relatively straightforward fence, we carried on. Approaching the next fence, he cocked his jaw and ran past it. In a split second I raised my hand to signify retirement – my boy had made the call for me.

He was very hot and after asking in my best french for some water for my horse, the crowd kindly provided me with some. I got him back to the stables and he recovered pretty quickly.

I absolutely adore Cornacrew, he is the most fantastic horse and I feel so honoured to have him in my life. The result here doesn’t reflect how hard he tried and how deep he dug. He’s still an out and out winner in my eyes!