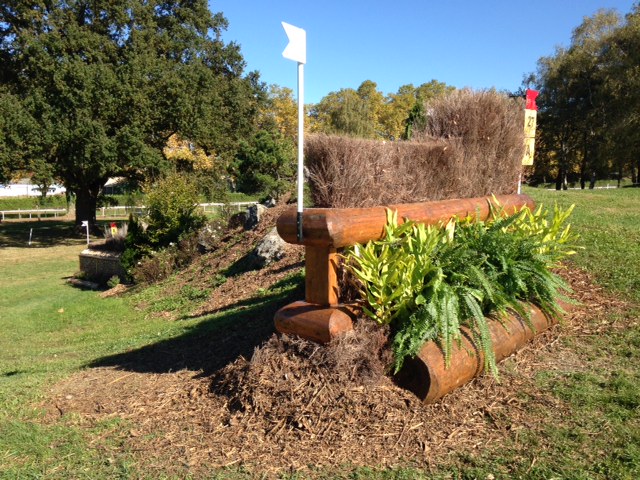 “It’s a typically French course with forward distances to skinnies and angles, so there are plenty of places to have a silly run-out,” said Mark Todd, who lies 14th overnight on NZB Campino.

There are 29 fences on Pierre Michelet’s course and 10 of these are combinations.

Three are water complexes, which are notoriously tough at Pau.

“All of the water fences will be influential,” said Paul Tapner, eighth overnight with Indian Mill. “I’m on a good horse and he’s up for the challenge. No one fence is concerning me; it’s technical and tough all the way home.”

“It’s not a big course but a lot of thinking is required. I have been scratching my head a lot.”

These are the four fences that have caused the most debate:

Horses will see water for the first time at fence 8. After clearing an enormous oxer (a) there is a triple brush (b) under the shadow of trees, which takes horses into the water.

Then horses turn right to a slope out, where they are confronted by a large brush (c) and another skinny (d) sited on a diagonal line after.

Emily King, lying third after dressage on Brookleigh, flagged this as a fence to watch.

“If the water wasn’t there it would be straightforward,” she said. “The turn naturally backs them off and having the water there as well could make a few horses a bit looky.”

H&H blogger Simon Grieve, who partners Cornacrew, added: “It walks three and a bit strides [between A and B] so you have to be committed and forward while holding your line.”

The second water is in the middle of the racecourse after some good galloping stretches.

A curved log pile (a) has a steep drop behind it into the water, where riders must be bang on line to avoid a glance off at the corner (bcd) behind. Horses will then do a U-turn to another narrow corner (20) on the way out.

“The first corner is a bit of a rider frightener because it has a curving outline,” said Tim Price. “It’s on a good distance but if the horse feels the rider doubting it might cause a duck out.”

An enormous rolltop (a) into the lake for the final time requires a leap of faith, but any huge jumps or uncomfortable landings risk overshooting the tight turn to a step (b) and fish (c) out. The latter are on a bounce distance.

“The waters are always difficult here and this is no exception. It’s a big effort with a big drop in and a bounce out,” said Mark Todd. “And then, just as you thought you were home, you get to fence 27 (below) — you can’t relax anywhere.”

The downhill landing from this brush (a) could make it harder to keep a tiring horse on an exacting line to the corner (b) at the bottom. Not only is it narrow, but Pierre has cleverly positioned it on the edge of a hedge, which could cause horses to waver off their line or misread it.

“Running downhill on a committed line with a tired horse can cause issues,” added Tim. “Some might jump the first and land a bit heavy because they’re tired and won’t be thinking about something being behind it.”

Tom Rowland, another British four-star debutant, said he will be taking the long route here.

“My aim is to complete and I don’t want to risk a problem so late on,” he said. “There’s a similar theme of fences on mounds running down to an angled skinny on a forward stride. We need to be brave, but careful.”