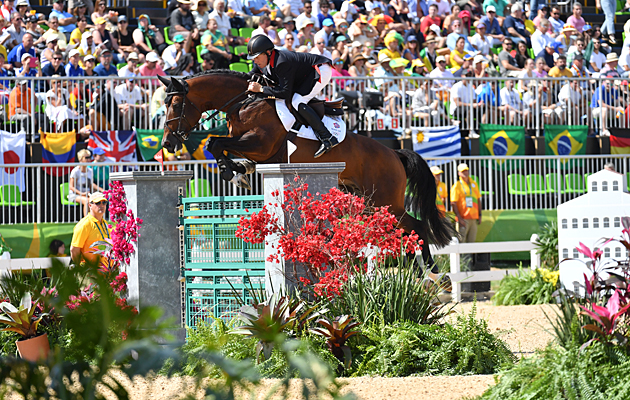 Britain will definitely not win a team showjumping medal at the Rio Olympics — the team has failed to qualify for the final round of the team contest tomorrow. This is a bitter disappointment after Team GB won showjumping team gold at the London Games.

Britain finished today on 13 faults in 12th place. Only the top eight teams qualify for the team final tomorrow.

Nick Skelton led off for Britain again today and the team appealed after Big Star, owned by Beverley Widdowson, was penalised with four faults at the water jump in an otherwise spectacular round.

“He’s never been in a water jump in his life and I didn’t think he was in that one, his heel just touched the tape,” he said. “The horse jumped amazing, I felt he couldn’t have jumped any better.”

Even if the appeal had been successful, the team would have finished in equal ninth — still outside the qualification zone for tomorrow.

Ben Maher’s ride, Jane Forbes Clark’s Tic Tac, took the back bar off the blue oxer at fence seven with his back legs.

“I didn’t think we did much wrong, we’re a bit short of luck on our team right now,” said Ben.

Michael Whitaker and Beverley Widdowson’s Cassionato also fell foul of the water at fence eight. They also had a time-fault.

“My horse and Nick’s are both normally brilliant water jumpers. It was on a bad distance, but we knew that,” said the rider, who also dropped his whip in the combination at fence four. “He was really spooking and I had to give him one and I dropped it, but it didn’t affect me — he was over-jumping if anything. The second half of the round was actually better apart from the water.”

The pressure was on John Whitaker to improve Britain’s position, but Team Harmony Management Co Ltd’s Ornellaia refused at the treble at fence four. Several rails down and time-faults meant they finished with 23 faults.

“Sometimes she looks at the first fence, but once she gets going she’s usually all right,” he said, somewhat at a loss to explain the problem. “I had to put a lot of pressure on her to jump it a second time and I knew I couldn’t improve the team position, so I just wanted to get her home.”

The only bright spot for Britain now is that Ben, Michael and Nick are all still contenders in the individual competition because they finished in the top 45 today.  They will jump again tomorrow, after which the top 35 pairs go through to the individual final on Friday, where they start on clean slates to challenge for individual medals.

Nick Skelton and Big Star at the Rio Olympics. Picture by Peter Nixon

Four teams are on a zero score going into tomorrow’s team decider. They are the USA, the Netherlands, Brazil and Germany.

Of these, the USA and Germany look in the best shape as their discard riders also performed reasonably today — Beezie Madden (Cortes ‘C’) had eight faults for the US and Germany’s Ludger Beerbaum (Casello) had four faults.

Brazil’s second rider out, Stephan de Freitas Barcha on Landpeter Do Feroleto, has been disqualified for over-use of the spurs. He will not be allowed to jump tomorrow, so Brazil will not have the opportunity to discard a score as they will field only a three-man team.

The final Dutch rider, Jur Vrieling, was eliminated today after Zirocco Blue had two refusals at the treble at fence four — this is not proving a successful Games for the rider, who was also disqualified on Sunday for using his whip excessively. He is allowed to jump again tomorrow, but as the horse has now had two refusals both times he has entered the ring, the Dutch will hope they do not need to rely on his performance.

The other teams through to tomorrow are France (one fault), Canada (four faults), Sweden and Switzerland (eight faults).

Full 20-page report from the Olympic showjumping in Rio in the issue of H&H published Thursday, 25 August, including full analysis of every round of the competition and expert comment from Geoff Billington and William Funnell.
0 Videos