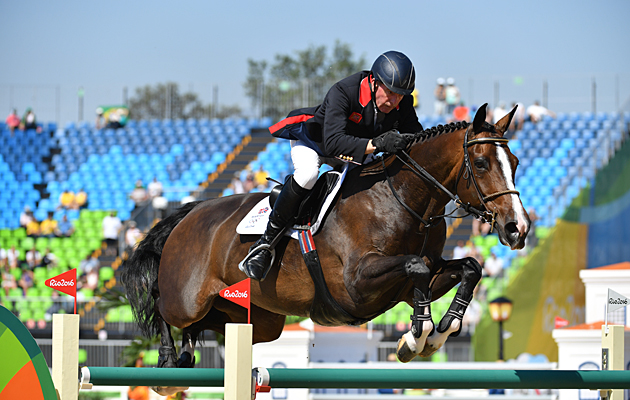 John Whitaker jumped Britain’s only clear round in the opening barrage of the Rio Olympics showjumping today.

The course proved much tougher than most riders expected and although 24 did jump clear, eight did not finish the course. Among the stars who were caught out were the Netherlands’ Jur Vrieling, who had two refusals with Zirocco Blue and was disqualified from the individual competition for excessive use of the whip, and France’s Penelope Leprovost, who fell off after a dramatic build-up to today for her and her ride Flora De Mariposa. France had already had to call in a reserve rider when Simon Delestre’s Ryan Des Hayetttes suffered an injury.

John was Britain’s anchorman with Team Harmony Management Co Ltd’s Ornellaia and had seen the problems Guilherme Jorge’s course was causing, particularly at the double at fence 11ab.

“I was a bit worried because she’s not got a lot of experience at this level, but she didn’t look at it,” he said. “I was happy with the round, she felt fresh and was listening. I wanted to go clear and have a confidence-giving round for her as much as for me.”

John Whitaker and Ornellaia at the Rio Olympics. Picture by Peter Nixon

Britain’s other riders all had one fence down, so the team’s total for today was eight faults. Faults today do not count towards the team results, but they do determine the team starting order for tomorrow. Today’s results also count for the individual rankings — only the top 35 riders at the conclusion of the team competition on Wednesday will go through to the individual showdown on Friday.

Nick Skelton was Britain’s pathfinder riding Beverley Widdowson’s Big Star and the pair had the final fence, the 1.55m square oxer at 12, down.

“It was my fault,” he said. “He jumped out of the double so well that I saw four strides, but I knew it should be a holding five, then I ended up on six and was too deep. That’s what happens sometimes when you hold too fast.”

Ben Maher and Jane Forbes Clark’s Tic Tac took down the back bar of the oxer at fence nine.

“I don’t know him terribly well and he caught me by surprise after the water [fence seven] by getting strong,” he said. “I over-corrected him in trying to give him a gap [before the fence] to compensate for the forward motion. But I got him down the last line, which has been causing dramatic scenes. The course was bigger than we expected and I think we’re in for a tough run.”

Michael Whitaker was unlucky to have the top plank at fence 10 off when Beverley Widdowson’s Cassionato just touched it with his left toe.

“He just caught it on the way down,” he said. “Everything else went as it should have done so I’m very happy.”

How did Britain measure up?

There are no official team results today because the rounds do not count towards team medals, but according to H&H’s calculations Brazil and Germany were the only teams to record a zero score so they will be the last two teams to start on Tuesday, the first proper round of the team contest. Switzerland, the Netherlands, Qatar, Canada and France all finished on four faults. The Brits recorded eight faults, as did the USA, Sweden and Spain.

With 15 teams in the running, this puts Team GBR very much in the middle of the pack at this early stage and the riders agreed that although not perfect, today’s rounds were a good starting point.

“If you are going to have a fence down, today is the day to do it,” said Ben Maher.

The team competition continues on Tuesday, when all team riders, plus individuals placed in the top 60 today, jump again. After that, the top eight teams and individuals in the top 45 progress to Wednesday, which is the team final.

Full report from the Olympic showjumping in Rio in the issue of H&H published Thursday, 25 August, including full analysis of every round and expert comment from Geoff Billington.
0 Videos