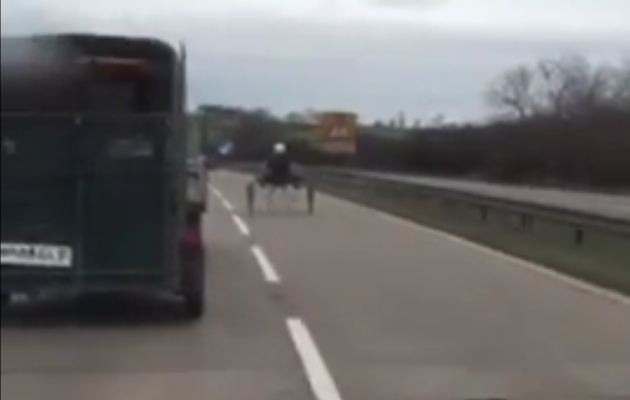 A farrier who filmed a horse being driven at 33mph in the fast lane of a dual carriageway wants as many people as possible to see the footage to raise awareness of the practice.

Mark Johnson saw two traps turn on to the A46 in Leicestershire last week. Believing they were going to be raced, he followed and turned on his dashboard camera.

“I just felt sheer anger,” he told H&H. “I’ve heard about these trotting races and seen footage but never experienced it myself.

“When I saw the elevation; the height his little legs were reaching, then slamming down on the tarmac – I’ve got no words to describe what I saw.

“I have worked on a few animals who have been though this and their bodies are wrecked – and I mean wrecked.”

Mr Johnson said the horses he has seen who have been raced like this on the roads are generally very stiff and reluctant to pick their feet up or hold them in a position in which he can work on them.

“You’d have to speak to a bodwork practitioner, but their backs are also very strange and their hocks and stifles very stiff,” he added.

“At that speed, you’ll have mini or if not big fractures from those impacts – you’ll have a horse in a lot of pain.”

But of course, Mr Johnson added, he was unable to do anything other than film the race – the other horse being hidden from his camera’s view – as the drivers were not breaking the law.

“You can take a horse on the road; they have priority,” he explained. “You couldn’t have proved unnecessary suffering or anything so legally there’s no problem – morally, it’s a different story.

“They didn’t overtly damage the horses, but at that speed, with vehicles close behind, if one of the horses had gone down on the tarmac, there would have been carnage.

“I followed because I wanted the footage – I wanted to raise awareness; this does happen.”