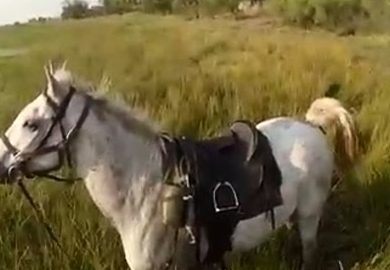 A video capturing a terrifying moment on a mounted African safari has gone viral on the internet.

A group of riders were enjoying a trek in the Okavango Delta in Botswana when chaos ensued.

The clip shows the cantering group being pursued by a running lion, when a man falls from his horse.

Thankfully the lion does not attack the rider and he escapes unscathed.

The footage was taken from GoPros attached to the chest of the rider who fell, Eli, and the back of the helmet worn by his wife, Lyndsey.

“We were riding in the grassland and our guide suddenly saw the male lion, previously hidden behind a termite mound, very close on our left,” said Lyndsey.

“When we quickly turned to ride away from him, a lioness popped out from behind some bushes and began to pursue our group.

“One of the horses cut in front of my husband’s horse, and he jumped off to avoid potentially getting trampled underfoot.

“When he emerged from the water, he found himself virtually face to face with the lioness.

“Luckily, she decided he wasn’t the lunch she wanted and he was able to safely retreat back to our guide.”

The frightening incident took place in October last year, but the video was published on YouTube by Kruger National Park on 9 November.

The footage has been viewed more than 100,000 times and attracted dozens of comments.

“Amazing,” said Raven Florez. “Always have wanted to ride there… maybe not so much now. Happy that humans and horses were safe.”