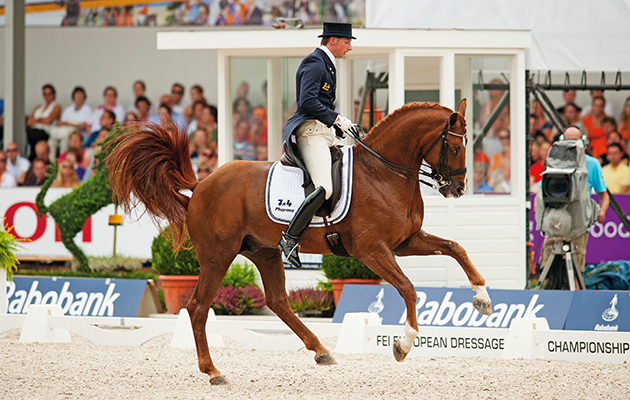 Sweden’s eminent dressage team horse Watermill Scandic has been retired, bowing out on a high after winning the Swedish championships last weekend (3-6 June).

The 17-year-old was a familiar face on the international circuit, taking his rider Patrik Kittel all round the world in his long big tour career.

“The moment was right,” said Patrik. “I wanted Scandic to go out as the champion he truly is.”

Together they claimed bronze at the European Championships in Rotterdam in 2011, were on the Swedish team on numerous occasions including at the London Olympics, won World Cup qualifying legs and this year finished fourth in the World Cup final in Gothenburg.

Patrik said he had “been through it all” with the charismatic horse.

“After circling the Who’s Who of the dressage world to find a suitable rider, Jan Greve and partner Anneke took a chance and gave me a opportunity to sit on Scandic.

“The rest is history, with Scandi-Man and I forming a very special bond that has taken us on a journey of highs and lows and bringing together friends for life. He has taken me along for the ride and I am truly thankful for the journey we have had together.”

Although the Swedish championships — where he scored 73.32% and 77.62% — was Scandic’s last competition, a special retirement ceremony will be held for him in his home country at Falsterbo Horse Show (2-10 July).

Patrik added: “He is such a unique, larger than life individual and I love him for that. He has, and will always be, his own person. Strong-willed, stubborn, cheeky, charismatic — my wife [Australian international rider Lyndal Oatley] would say we are two of the same.”

The stallion has an impressive record. While simultaneously standing at stud, he has competed at international grand prix for over seven years, performing 99 FEI tests in that time.

His best known British offspring is the 11-year-old Annette Ballerina, who was sourced and imported by Rebecca Hughes as a young horse.

The mare is now owned by Claire Gallimore, under whom she contested the young rider European Championships in 2015 and is now competing at inter I.